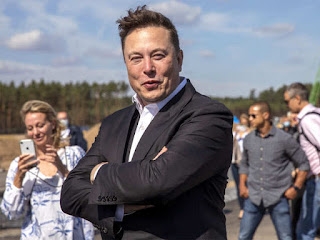 Elon Musk is no longer the world’s richest person after Tesla Inc. shares slid 8.6% on Monday, wiping $15.2 billion from his net worth.Tesla’s biggest decline since September was fueled in part by Musk’s comments over the weekend that the prices of Bitcoin and smaller rival Ether “do seem high.”His message -- via his favored medium of Twitter -- came two weeks after Tesla announced it added $1.5 billion in Bitcoin to its balance sheet.Musk drops to second on the Bloomberg Billionaires Index of the world’s 500 richest people with a net worth of $183.4 billion -- down from a peak of $210 billion in January.Amazon.com Inc. founder Jeff Bezos reclaimed the top spot even as his fortune fell by $3.7 billion to $186.3 billion Monday.
at February 23, 2021
Email ThisBlogThis!Share to TwitterShare to FacebookShare to Pinterest