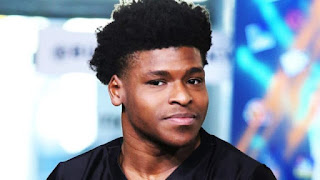 Netflix has a problem.Last year the streaming service found itself a hit with Cheer, which followed Navarro College’s elite cheer team as they trained for the National Cheerleading Association’s championship competition, which sees hundreds of college teams flocking to Daytona Beach for the annual event.Known nationally as a powerhouse team led by coach Monica Aldama, the cheerleaders attend the small junior college in the sleepy rural town of Corsicana, Texas. The docuseries highlights the athletes’ various heart-touching backstories as they practice day and night, risking breaking limbs as they back-handspring, jump, and perform gravity-defying stunts in order to bring home the coveted championship trophy.It didn’t take long for cheerleader Jerry Harris to emerge as a breakout star. The always positive 21-year-old became beloved for his inspirational mat talks, leading viewers to root throughout the series for him to make it “on the mat” for the big competition.He seemed poised for a smooth transition to become a fixture on TV screens. Ellen DeGeneres tapped him to interview celebrities on the red carpet during the Academy Awards for her show and Oprah brought him out during her stop in Dallas for her 2020 Vision tour. He appeared on morning shows and was beginning to land sponsored deals, leading him to announce he was moving into his own place.But everything unraveled when Harris was arrested in September for production of child pornography, allegedly "enticing” a minor, who was 13 at the time, “to produce sexually explicit videos and photos of himself,” according to federal prosecutors in Chicago.Harris allegedly admitted to officials he solicited nude photos over Snapchat from up to 15 minors. He also is accused of having sex with a 15-year-old during a cheerleading event in 2019, according to the criminal complaint. It notes Harris first began talking to the boy on Snapchat when the minor was 13.Harris was hit with fresh charges in December from a seven-count indictment, accusing him of receiving and attempting to receive child pornography, as well as persuading a minor “to engage in sexually explicit conduct for the purpose of producing a visual depiction of such conduct, and … transmitting a live visual depiction of such conduct.”The new charges included five minors from Texas, Illinois, and Florida. He has pleaded not guilty to the charges. His lawyer did not respond to request for comment by the time of publishing.Harris has remained in jail since his initial arrest and Netflix has issued only one statement on the matter. "Like everyone we are shocked by this news. Any abuse of minors is a terrible crime, and we respect the legal process,” a spokesperson said.Now, two more men who appeared on Cheer have been arrested on separate charges related to sexual abuse of minors.Mitchell Ryan, who was a member of Navarro College’s cheer team and is seen on the show, was arrested on Wednesday for aggravated sexual assault of a child stemming from an incident in July 2020, according to the Dallas County Sheriff’s records.The 23-year-old had his bond set at $50,000 and was released on Friday morning. Ryan had worked at Cheer Athletics, a gym in Plano, Texas, which released a statement that said it first learned of the allegations last year and immediately terminated its relationship with Ryan and alerted the local authorities.His lawyer Jeremy Rosenthal told the Dallas Morning News the charges have been an “extremely hard challenge for Mitch and his family. Very nightmarish.”“We want to get this over with because I think at the end, he’ll be cleared on this,” he added. Rosenthal did not respond to The Daily Beast’s request for comment by the time of publication.On the same day, Robert Joseph Scianna Jr. was arrested in Chesterfield County in Virginia, and charged with taking indecent liberties with a child and use of an electronic communication device to solicit sex, according to a press release from the local police department.Scianna is a coach and choreographer and appeared in one episode of Cheer for a late-night photoshoot with close friend and Navarro College cheerleader Gabi Butler, who has 1.6 million followers on Instagram. Scianna is not a part of Navarro College’s cheer team.Officials claim the 25-year-old met a “juvenile male through a social media platform and arranged to meet the juvenile for sex.” He is being held without bail and it’s not clear if he has representation yet.Over the summer, Scianna was invited to be a guest VIP for a week at the famed Pennsylvania training center Woodward for a cheerleading camp.After the news of his arrest, the camp swiftly put out a statement, saying it was “shocked and appalled” at the allegations. It noted Scianna didn’t have “any direct coaching responsibility or supervision of the campers” over the summer.So far, the Pennsylvania cheer camp and Texas cheer club are the only organizations that have addressed the allegations surrounding Scianna and Ryan.
at February 14, 2021
Email ThisBlogThis!Share to TwitterShare to FacebookShare to Pinterest
Labels: Netflix