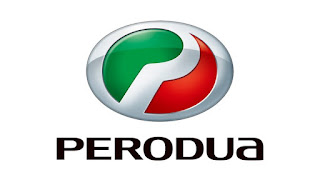 Perodua has announced that its latest D55L SUV is now open for booking. According to the company, it is the first to be equipped with Level 2 Autonomous Driving features, as well as a turbocharged engine. At launch, the vehicle will be available in three variants – X, H and AV – at prices estimated between RM62,500 and RM73,400, on-the-road before insurance in Peninsular Malaysia.

But before we begin talking about the car, allow us to answer the question you’re probably asking by the time you’re reading this sentence: Why isn’t the D55L’s photo shown as the header image?

Well, that’s because Perodua has not officially revealed the vehicle’s design just yet. The same can be said regarding its full specifications as well, which the company has only vaguely provided in its recent press release. In addition, “D55L” is actually the upcoming SUV’s codename, and its actual production moniker (as well as its design and specs) will only be fully unveiled upon launch. Rumour has it that Perodua is planning to name the new car as the “Ativa”, but we can’t be certain of that until the time comes. 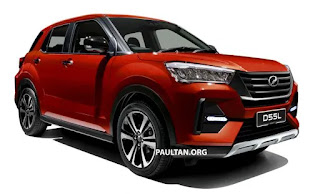 If you have seen alleged images of the vehicle circulating around online, that’s because those are digital renders (shown above) provided by automotive new outlet PaulTan – based on the designs of the Daihatsu Rocky and Toyota Raize. Both of which share the same Daihatsu New Global Architecture (DNGA) approach which, according to the website, is said to also apply to the upcoming Perodua D55L.

Provided that the speculations and renders of the vehicle’s design is accurate, the D55L will feature a smaller body than its other Perodua-branded SUV cousin, the Aruz – also making it slightly comparable to size of the current generation Myvi. Of course, rather than looking like a spitting image of the Daihatsu Rocky or Toyota Raize, you’ll be certain to expect some tweaks to its design to be more Perodua-like. Judging by the look of the two aforementioned SUVs, if the local car brand is ever considering passing on the “Kembara” name to a worthwhile successor, the D55L would be it – in our opinion, at least. 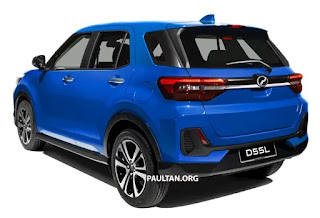 As for its headlining features that are confirmed by Perodua, the D55L is the first vehicle from the company to ever include Level 2 autonomous driving capability, which is made possible via its Advanced Safety Assist (ASA) system. This feature is present on all variants of the vehicle; where the Lane Departure Warning and Prevention function is available across all models, while the Lane Keep Control, Blind Spot Monitor, Rear Cross Traffic Alert and Adaptive Cruise Control are only exclusive to the top AV.

For your reference, Level 2 car autonomy only handles partial tasks and driving will still require the driver’s full attention. These tasks are limited to acceleration, steering and braking in cases mainly related to safety features. As described by Perodua, ASA is a driver assistance system that helps to reduce the risk of collisions and is by no means a substitute for safe driving. 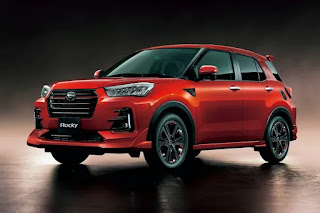 Other than the automation and safety features, the D55L is also the company’s first car to be equipped with a turbocharged engine and CVT (Continuously Variable Transmission), both contributing to a “class-leading” rated fuel efficiency of 18.9 km/l. Although unconfirmed, it is believed that the vehicle is powered by a 1KR-VET 1.0 litre (996 cc) turbocharged three-cylinder engine – the same engine featured on the Daihatsu Rocky and Toyota Raize. Perodua added that the upcoming SUV will also come with LED headlamps, while its H and AV variants get Adaptive Driving Beam, a 7-inch multi-info display and a 9-inch touch-screen infotainment system with voice recognition. 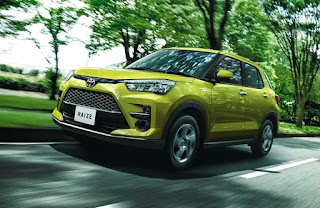 At launch, the X and H variants will be available in Glittering Silver, Granite Grey and Cobalt Blue – with the latter version also sporting extra colours, namely Pearl Diamond White and Pearl Delima Red. The AV variant, on the other hand, comes in a choice of either Glittering Silver, Granite Grey, Pearl Diamond White, or Pearl Delima Red – the last two colours also available with a black roof option. Seeing that no official photos of the new SUV have been provided at this time, we’ll leave it to your imagination on how these colour variations would look like on the car.

Lastly, Perodua is also offering a five-year/150,000 km warranty for every order of the D55L. The launch date of the D55L has yet to be confirmed, but rumours suggest that the company may debut it in early March.