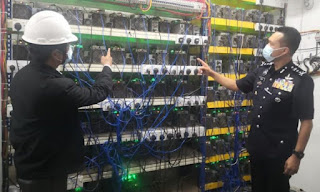 Local authorities recently raided a premises in the state of Pahang, after its higher-than-average electricity consumption gained their attention. Turns out, the three-storey residence had been converted into a miner farm and apparently tasked to mine the most lucrative digital on the crypto market, Bitcoin.
As indicated by the pictures posted on the official Facebook page of Polis Pahang, the electrical wiring of the site was rigged to accommodate the shelves of miners. On a related note, it isn’t specified whether or not the miners are GPU-based, but judging by the layout and setup of these miners, it’s very likely that they aren’t. If anything, they all look like ASIC miners.

To be clear, there is nothing wrong with mining for the cryptocurrency, but it is wrong to tamper with the electrical wiring of a house in what is seemingly a residential area, and stealing power in order to keep the miners running. At best, you’re drawing more power for the miners to work harder. At worst, you could cause a blackout within the immediate area of the miner farm. On another note, this isn’t the first time that a miner farm in Malaysia was busted by local authorities.

Cryptomining has been undergoing a resurgence in its popularity, mainly in part of Bitcoin’s value skyrocketing to its current average price of RM187000 per coin. That, and the fact that Elon Musk’s US$1.5 billion (~RM6.11 billion) investment in the currency allowed the currency to gain even more value overnight. Even Ethereum, the second most valuable digital coin on the market, has more than tripled in its value since last year, with one unit of the currency now sitting at an average of RM7360.

at February 10, 2021
Email ThisBlogThis!Share to TwitterShare to FacebookShare to Pinterest