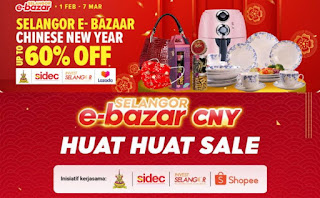 The Selangor state government through Selangor Information Technology and Digital Economy Corporation (SIDEC) together with Invest Selangor have just launched yet another edition of Selangor E-Bazar on Lazada and Shopee.
This time around, the E-Bazar is being held in conjunction with the upcoming Chinese New Year. Starting from now until 7 March 2021, the state will be channelling RM2 million in digital vouchers on both e-commerce platforms.

While this would allow consumers to get their hands on products at a much lower price through participating E-Bazar CNY merchants, the whole idea is actually is to help businesses adapt to the ongoing COVID-19 situation. As noted above by the Menteri Besar of Selangor, Amirudin Shari, the state is targeting the participation of 25,000 SMEs as well as micro-businesses, including 12,500 new e-merchants for this edition of E-Bazar.

Businesses can start signing up now, the state said, but their business address must be registered in Selangor as well as meeting other criteria set by Shopee and Lazada. They can choose to register on either Shopee or Lazada or even both, the state said. After completing the form, they should receive a confirmation email from Shopee or Lazada in regards to their participation as a seller for this campaign.

The Selangor state government is clearly hoping that increased consumer spending will have positive ripple effects throughout the state economy. The state claimed that SMEs that participated in two E-Bazar campaigns in 2020 have managed to generate a total of RM1.39 billion to the economy through direct sales worth RM43.76 million which were initiated from the RM 3 million worth of vouchers that were placed into both E-Bazar editions.

For merchants that want to learn more about Selangor E-Bazar, do head on to SIDEC’s official website. As for those who want to take advantage of the discounts, just visit Selangor E-Bazar minisites over at Lazada and Shopee.