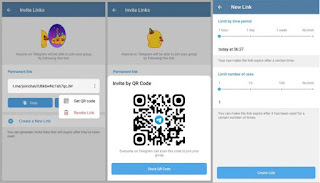 Telegram is currently testing several new features via its latest beta, version 7.5. According to TestingCatalog, among them includes QR code-based group invitations, disappearing messages, widgets for Android users, and more.
Much like rival private messaging platform WhatsApp, Telegram now allows administrators to share invitations to people who wish to join their group chats via special links or QR codes. These invitations can also be set to expire after a duration of time – such as an hour, a day or none at all. Alternatively, administrators can also customise them further by adding a limited number of uses – for instance, setting a limit of only 100 scans or clicks before the invitation becomes inaccessible for other users. The limited invitation feature is quite interesting and is somewhat reminiscent of Clubhouse‘s invite-only approach for its group chats. 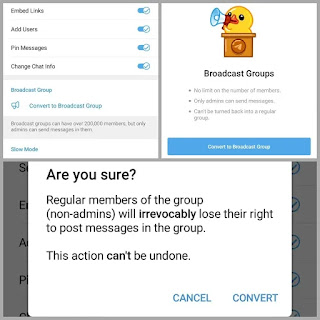 Speaking of which, version 7.5 also introduces the new Broadcast Group feature. This enables users to create broadcast-only only groups, meaning that only admins or selected members are allowed to chat. Other participants may only observe the discussion, therefore making this feature to resemble that of a press conference or a seminar – much like Clubhouse. Additionally, TestingCatalog says that a Broadcast Group is allowed to have an unlimited number of “audiences”. Normally, this would cause a headache for administrators but seeing that only a limited number of people are allowed to chat, certain risks such as spam and trolling can be avoided entirely.

It is also possible to convert an existing group into broadcast-only, but this would cause non-admin members to lose the ability to chat in the channel. Also, keep in mind that the transformation is irreversible, so all changes are permanent once the decision is made. 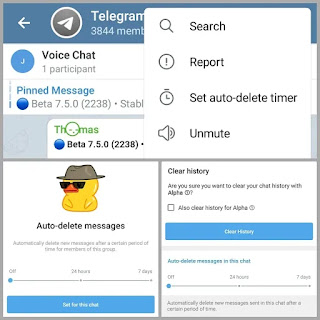 Taking another page from WhatsApp (and also Facebook Messenger) is the disappearing messages feature, where – as its name suggests – deletes a particular message after a duration of time. In Telegram’s case, these can be set by the administrator to be within 24 hours or 7 days. This feature has its usefulness, such as deleting reminders or pinned posts that are no longer relevant after a certain period of time.

Lastly, version 7.5 now enables Android users to add Telegram widgets to their phone’s home screen in either a 2 x 2 or 5 x 2 layout. This enables them quick access to their favourite individual or group chats – a feature that most users would agree was a long time coming. 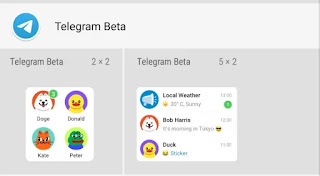 The Telegram beta was made available only to testers sometime last week. At this time, the platform has not announced when the stable version of 7.5 is expected to be rolled out to the public.
at February 23, 2021
Email ThisBlogThis!Share to TwitterShare to FacebookShare to Pinterest
Labels: 7.5Beta, Introduces, Invites, Newfeatures, QRCodeGroup, Telegram