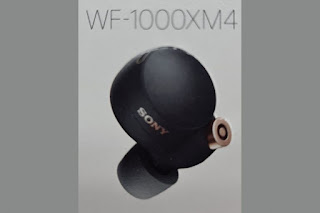 After two long years since the release of its last flagship-tier true wireless earbuds, it appears that Sony may finally be gearing up to debut a new model sometime soon. News of this was recently made known by Reddit user Key_Attention4766, who claims to have obtained the box sleeve of the allegedly upcoming Sony WF-1000XM4 TWS.

Rather than showcasing the sleeve in its entirety, the user has instead shared two cropped images which reveals one of the earbuds and some information of its expected key features. From the first photo (above), the earbuds is shown to sport a new design that ditches the oval-shaped look of its predecessor – the WF-1000XM3 – for a more compact and familiar-looking approach.

There are no physical buttons visible on the alleged WF-1000MX4, suggesting that the sides of each earbud may come with a touch-based panel that blends seamlessly with the rest of the design. Due to the quality of the image and the limited perspective, it is hard to make out or speculate what other features that are available on the supposedly upcoming audio device.

Meanwhile, the second image provided by the Reddit user reveals details of the earbuds’ battery life expectancy, which claims 6 hours of continuous use. This can be further extended to an additional 16 hours via its included charging case – therefore totaling its usage up to 24 hours. This is quite surprising as its predecessor’s case is capable of providing an additional 32 hours, which is obviously larger than what is allegedly offered with the new WF-1000MX4.

Other than that, the next generation Sony TWS will naturally come with active noise cancelling (ANC) capabilities, although the specifics of this feature was not provided. Key_Attention4766 promises to share more details of the new earbuds once he receives the main box.

As usual with leaks claiming to have exclusive insights to unannounced products from any brand, it is best to take these images or information with a nice pinch of salt. It is not known when Sony is planning to launch the alleged WF-1000MX4 TWS earbuds – let alone officially announce its existence.