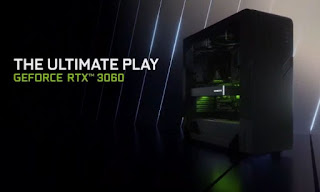 The NVIDIA GeForce RTX 3060 is still days away from its official launch, yet by the power of capitalism, the card has already begun appearing on an online retail store that caters to a second hand market. The good news, depending on your view, is that the cards only being in Belarusian site called Onliner.

One particular seller is offering up three Gigabyte RTX 3060 Eagle OC cards for 2800 Belarusian Rubles, which comes up to approximately RM4370 per card. Yes, you read that right; that is the price the seller is charging for one card, and not all three of them.

In addition to the price, the seller says that one of the cards in the list had already been opened up for the purpose of “verification”. By that statement alone, it is highly likely that the seller wanted to test the card out for mining purposes and see how much NVIDIA had limited its prowess as a cryptominer. 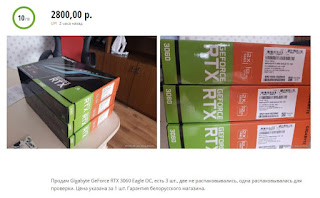 To quickly recap: last week, NVIDIA announced that it would be launching cryptomining specific GPUs, known officially as CMP, to address the ongoing and sordid GPU mining issue. At the same time, the GPU maker also announced that it will limit the RTX 3060‘s hashrate as a mining GPU, in an effort to deter miners and scalpers from scooping up what little stock of the card there is, or will be at launch.

We’ve mentioned before that buying a graphics card that was previously used for mining is usually a bad idea. Not all miners reveal the current state of the card at sale; they can tell you that it was used for mining, but what they would be reluctant to disclose to you is just how long the card was used for that purpose. 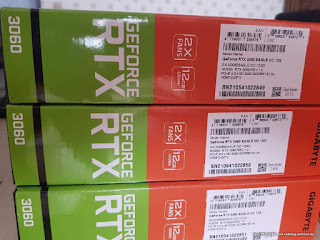 That leads us nicely into another piece of good news. Whether the seller did it on purpose or is unaware of their action, one of the pictures clearly shows the serial number of all three cards. This alone would make it easier for Gigabyte to find out where the card is sold, and to whom it was sold.
at February 22, 2021
Email ThisBlogThis!Share to TwitterShare to FacebookShare to Pinterest
Labels: BeingSold, Cards, Market, Nvidia Geforce RTX3060, on, Reportedly, Secondhand