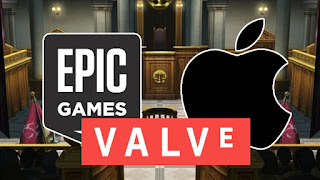 Valve have rejected a subpoena from Apple demanding information on Steam sales and operations for six years, in the ongoing Epic Games vs. Apple lawsuit.PC Gamer reports a joint discovery letter was filed to the District Court of Northern California regarding the subpoena made in November 2020.The letter explains Apple’s position that Valve’s Steam store is “the dominant digital game distributor on the PC platform and is adirect competitor to the Epic Game Store.” Apple argue that Epic Games could sell Fortnite on Steam, and as such made a subpoena.Apple had requested Valve produce “(a) total yearly sales of apps and in-app products; (b) annual advertising revenues from Steam; © annual sales of external products attributable to Steam; (d) annual revenues from Steam; and (e) annual earnings (whether gross or net) from Steam.”They claim this information “is crucial for calculating the total size of the market for Epic’s available digital distribution channels, which this Court already has found highly relevant to this case.” This was due to the case requiring Apple to prove “the strength of competition for consumers and app developers” among online store.In addition, Apple demanded “(a) the name of each App on Steam; (b) the date range when the App was available on Steam; and © the price of the App and any in-app product available on Steam.” Apple claim this would help them “determine the scope and breadth of the digital distribution marketplace,” and part of them proving the strength of the competition.The letter claims Apple and Valve “engaged in several meet and confers,” but Valve would ultimately refuse to provide the requested information. Valve did state that the information requested is available in “some undisclosed, readily accessible format, but generically claims it won’t produce the information because it is confidential or too burdensome to gather in the manner Apple requested.”
at February 19, 2021
Email ThisBlogThis!Share to TwitterShare to FacebookShare to Pinterest
Labels: Apple, Refuse, Value