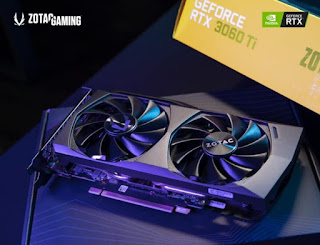 As PC gamers struggle to find a desktop graphics card in order to game, both NVIDIA and AMD, along with their AiB partners are clearly doing their very best to meet the growing demand with their already constricted supply. That is, up until the Hong Kong-based ZOTAC openly backed GPU mining farms.

In what can only be described as a tone-deaf move, whoever was handling ZOTAC USA’s Twitter account decided to come out in support of the recently revived GPU mining movement, posting an image of a mining rig being powered by multiple GeForce RTX 3070 Twin Edge graphics cards. Then, to add insult to injury, it also tagged the photo with the hashtag “#PcGaming”, despite it bearing no relevance to gaming.

To its credit, the tweet was reportedly taken off the air soon after, but the damage had already been done. Thanks to Videocardz, a screenshot of the tweet has been saved and as such, we’re able to give you a glance at the posting that should not have been. 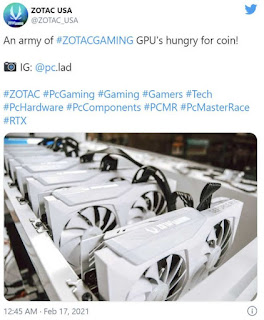 GPU mining has seen a resurgence of late, primarily due to the ongoing rally in the value of the cryptocurrencies Bitcoin and Ethereum. At the time of writing, the average value of Bitcoin sits at just over RM200000, while Ethereum is now worth about RM7300. Even worst, GPU miners in China are now turning their attention towards gaming laptops powered by NVIDIA’s GeForce RTX 30 series mobile GPUs, seeing how they are unable to get their hands on their desktop counterparts.
at February 17, 2021
Email ThisBlogThis!Share to TwitterShare to FacebookShare to Pinterest
Labels: Caughty, GeforceRTX3070, GPUMining, MiningRig, Multiple, Openly, Promoting, USA, Zotac