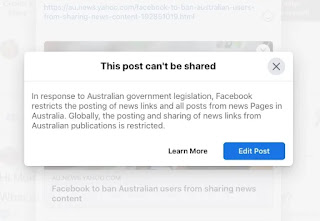 Facebook has announced that it has begun to restrict Australian publishers and users from posting and sharing news content on its platform. This is the company’s latest response to a hotly debated law called the News Media Bargaining Code.

In general, Australian publishers are now no longer able to post contents on their Facebook Pages. As for normal Facebook users in Australia, they are also not able to view and share news from Australian and international news Pages.

Similarly, Australian news Pages and news contents are restricted for international users as well. The company is quite serious about its decision to the extent that Australian users can’t even see the contents on Facebook’s own official page:

We have also checked out the Facebook Pages that belong to two prominent Australian news outlets and were greeted with these views: 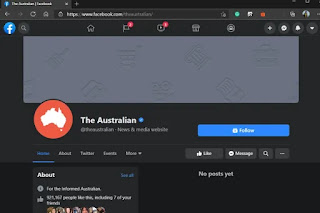 In general, the move is the opposite of what Google is doing who has entered into paid deals with several publishers including global conglomerate News Corp that runs several publications in Australia as well as the country’s own Nine Entertainment and Seven West Media.

In fact, Facebook did point the difference between its approach and Google in its announcement today. The company said that Google Search is closely tied to the news while less than 4% of contents that users saw on Facebook are news. Facebook also claimed that Australian publishers have received 5.1 billion free referrals through its platform which is apparently valued around AUD 407 million (~RM 1.28 billion).

at February 17, 2021
Email ThisBlogThis!Share to TwitterShare to FacebookShare to Pinterest
Labels: Australians, Bans, Facebook, its, NewsContensts, on, Platform, SharingandViewing