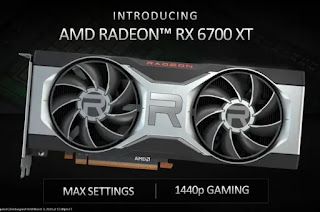 AMD officially pulled back the curtain from the Radeon RX 6700XT graphics card mere moments ago. As per initial reports, the card’s launch now gives the brand a GPU for the mainstream gaming market, along with some relatively mainstream specifications.
Like its siblings, the 6700XT is based on the RDNA2 GPU architecture, while the reference card is equipped with a dual-fan cooling solution instead of the usual triple-fan chassis AMD slapped onto the 6900XT and 6800 series. 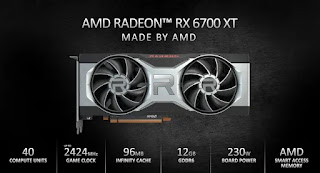 Underneath the hood, the 6700XT comes with 12GB GDDR6 graphics memory, a game clock of 2424MHz, 40 Compute Units (CUs), and 96MB Infinity Cache. Regarding the latter, AMD told us that the reason the 6700XT was given a smaller Infinity Cache pool than its more powerful sibling was by design; it says that that amount was found to be perfect for 1440p gaming or at resolutions lower than that.

As for power, the card has a 230W TDP which is channelled via an 8-pin and 6-pin PCIe power port combo, and yes, it will support AMD’s Smart Access Memory (SAM) feature. Ports-wise, we’re looking at one HDMI 2.1 port and three DisplayPort 1.4a ports. 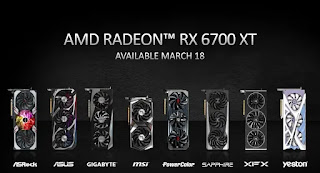 As for pricing, the AMD Radeon RX 6700XT starts off at US$479 (~RM1940) and is slated for availability from 18 March onwards. Of course, the ongoing semiconductor and GPU issue does bring about the question of whether there will be enough 6700XT units at launch.

To that end, AMD says that it will do everything in its power to ensure that there will be enough supply for gamers to buy the card at all authorised resellers and PC stores globally when it lands.