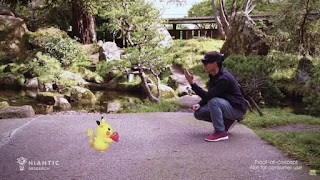 Microsoft launched its new Mesh mixed reality platform during its currently ongoing Ignite event. But stealing the show is Pokemon Go, the AR mobile game by Niantic. The two companies have come together to create a proof-of-concept version of the game, played using the HoloLens 2.
The demo of the HoloLens version of Pokemon Go showcases basically the game’s AR mode. For the unfamiliar, this mode allows you to see various pocket monsters in the augmented wild. But rather than having your vision funneled through a phone’s screen, the idea is you get to see a lot more of the world in AR thanks to the HoloLens.

And it’s basically the ideal way to play Pokemon Go using AR mode. There are many constraints with playing the game with AR using a phone, the least of which is battery life. Seeing more of the game overlaid into the world works wonders for immersion, which is ultimately the motive of the mode.

Unfortunately, this is unlikely that the average consumer will ever be able to play Pokemon Go this way. For one, Niantic says that this demo is not intended for consumer use. After all, it’s just a proof of concept. And even if it is, AR glasses are not exactly affordable. This naturally includes the HoloLens 2 itself.

at March 03, 2021
Email ThisBlogThis!Share to TwitterShare to FacebookShare to Pinterest
Labels: Hololens, Like, Looks, Meant, on, PokemonGo, Theway, tobeplayed