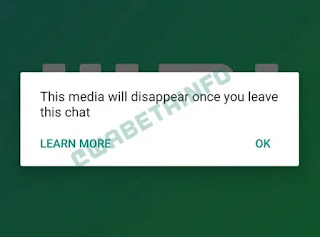 As most of us are aware by now, the current version of WhatsApp allows users to post disappearing messages in chats, which is automatically deleted after seven days. According to a recent discovery by WABetaInfo (via Twitter), it appears that the Facebook-owned platform may be implementing that feature to image sharing as well.
The site says that the new disappearing images will function differently than its text-based counterpart. Reportedly taking cues from a similar feature on Instagram Direct, WhatsApp will immediately delete designated photos after the receiver has viewed it once. Due to their temporary nature, it’s also likely that disappearing images are not stored on the receiver’s device or in chat backups.

Based on the screenshots provided, disappearing photos are designated by tapping the “1” icon below its preview before sending it to the receiver. Once sent, the image will appear as a blurred thumbnail, which users are required to tap in order to view it in full. After the receiver has opened the thumbnail, WhatsApp will then notify that the image will be deleted upon closing the viewer or chat.

WABetaInfo added that users are also restricted from forwarding these photos to another chat or exporting them outside of the private messaging platform. However, it also noted that WhatsApp does not feature any form of screenshot detection or prevention – a privacy flaw that is also present for its existing disappearing messages feature. Therefore, it is still possible that users may utilise screen capture in order to keep these temporary photos. Until certain preventive measures are implemented, it is advisable to not share anything highly confidential via this approach, or only send it to trusted individuals. 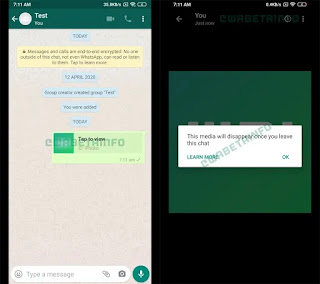 It is not known when exactly WhatsApp is planning to implement this new disappearing images feature to its service. WABetaInfo vaguely suggests that it will arrive in a future update on both Android and iOS versions of the app, which could mean several weeks or months down the line.
at March 03, 2021
Email ThisBlogThis!Share to TwitterShare to FacebookShare to Pinterest
Labels: Disappearing, Feature, Images, New, on, Reportedly, Whatsapp, Working