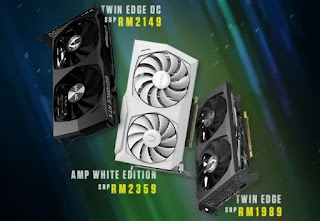 Starting the Twin Edge Series, both the standard and OC variants are identical, both in build and aesthetics; both cards are equipped with the same dual-fan setup, along with Zotac’s IceStorm 2.0 cooling solution. A single 8-pin PCIe power port is all that is required to power both cards, and both cards have a power envelope of 170W.

What sets the two cards apart are their boost clocks: the standard Twin Edge has a boost clock of 1777MHz, while the Twin Edge OC is tweaked to run slightly faster at 1807MHz. Apart from that, both cards also have the same number of output ports. 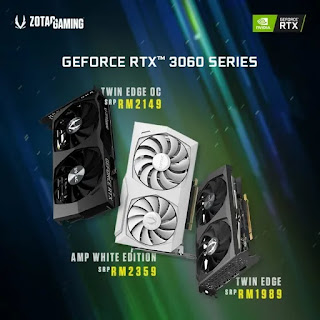 Then there’s the AMP White Edition of the RTX 3060. Like all models before it, the card shares the brand’s dual-fan AMP design, but per its name, the card sports an all-white motif that is inarguably pleasing to the eye. It is also the fastest of the three cards, with a boost clock of 1867MHz.

Clockspeeds and designs notwithstanding, all three cards bear the same 12GB GDDR6 of graphics memory running at 15Gbps, a 192-bit memory bus, and support for PCIe 4.0.

The new Zotac RTX 3060 cards are available at all authorised reseller and PC stores, provided said shops have stock. Pricing starts at RM1989 for the Zotac RTX 3060 Twin Edge, RM2149 for the Twin Edge OC, and RM2359 for the AMP White Edition.