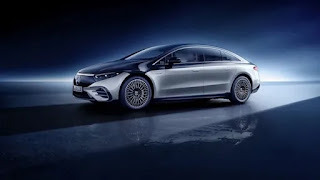 Months after previewing its impressive all-in-one 56-inch Hyperscreen, Mercedes-Benz has now officially unveiled the vehicle that will hold the honour of featuring it. Meet the new EQS sedan, the company’s first long-range electric vehicle (EV) out of nine others that it plans to release by 2022.
Unlike the original Vision EQS concept which featured a futuristic and sci fi-esque design, the actual EV sports a look that is akin to Mercedes’ S-Class series. In a bold move by the luxury car brand, the new car features a two-tone colour scheme, where the upper half of the vehicle is in black and the other in silver. On its front is what Mercedes refers to as a “black radiator grille” that features 3D star patterns, paired with headlights on each side which are connected by a light bar. Instead of an ornament, the EQS’ comes with an embedded logo of the luxury car brand on its hood, and an even larger and prominent logo is also featured on its grille. 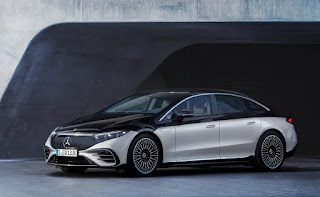 Mercedes revealed that the car will be available in two variants: the rear-wheel drive EQS 450+, and the all-wheel drive EQS 580 4MATIC. Performance-wise, the former is equipped with a single rear motor electric powertrain (eATS) that can produce 245 kW of power and 568 Nm of torque, capable of hitting 0 – 100 km in 6.2 seconds and a capped top speed of 210km/h. Meanwhile, the latter comes with a twin motor that produces 385 kW and 855 Nm, and is expected to go from 0 – 100 km at a faster rate of 4.3 seconds. It’s top speed, however, is also limited to that of its single motored sibling. 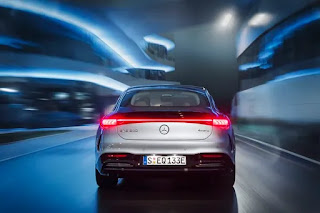 Both models will come with a 107.8kWh battery pack, and a smaller 90kWh version is planned to go on sale as well, according to Mercedes. The claimed operating range is 770km based on the European WLTP (Worldwide Harmonised Light Vehicle Test Procedure) cycle, but the company did not specify if this applies to both of the aforementioned EQS variants, or just one of them. 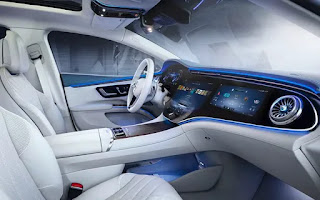 Apart from the all-digital HUD and infotainment system provided by the aforementioned 56-inch MBUX (Mercedes-Benz User Experience) Hyperscreen, the new EQS EV comes with a variety of features. Featured within its interior are a total of 15 710-watt Burmester surround sound speakers, customisable interior ambient lighting, HEPA air filtration system, rear infotainment systems for passengers, and onboard sensors which can detect hand gesture controls for operations such as opening and closing car doors. The last one, especially, is pretty cool. 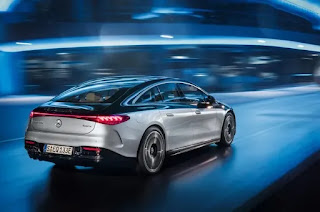 Driving features, on the other hand, include a slew of driver assistance and safety systems. These include Active Distance Assist Distronic, Active Steering Assist, Active Lane Keeping Assist and Lane Change Assist, and the new Attention Assist which sends out alerts if it detects any anomalies with the driver’s driving behaviour (ie; microsleep).

The EQS also comes with Mercedes’ lidar-powered Drive Pilot system, which allows for Level 3 semi-autonomous driving. However, the manufacturer noted that this feature will only be enabled in the first half of 2022, and for now is only compatible for selected highway sections in Germany at speeds of up to 60 km/h.

The new Mercedes EQS EV is slated to be available at US dealerships in fall 2021. Its global availability, however, has not been determined at this time.