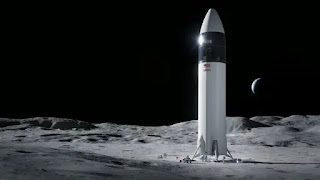 US space agency NASA has awarded aerospace manufacturer SpaceX a US$2.89 billion (~RM11.9 billion) contract to build a moon lander in order to bring the next two American astronauts to the moon. In response to the news, SpaceX CEO and founder Elon Musk tweeted “NASA Rules!!”
For the mission, NASA intends to land the first woman and first person of color on the moon through its Artemis programme. It will involve sending four astronauts aboard NASA’s Orion spacecraft to lunar orbit. Then, two of them will transfer to the SpaceX human landing system (HLS) to make their descent to the moon’s surface.

Hours after the award announcement, an ecstatic Musk tweeted, “Everything to the moon!” – a fitting reference to his longtime advocacy of cryptocurrency. According to Reuters, SpaceX beat out two competitors for the bid – Amazon founder and billionaire Jeff Bezos’ Blue Origin and defense contractor Dynetics Inc.

The SpaceX moon lander, called Starship, apparently features a spacious cabin and two airlocks for astronaut moonwalks. Its architecture is intended to evolve to a fully reusable launch and landing system for travel to the moon, Mars, and beyond.

Indeed, Mars seemed to loom in the background as NASA’s ultimate, long-term goal. Kathy Lueders, NASA’s associate administrator for Human Explorations and Operations Mission Directorate, said that the lunar mission “puts humanity on a path to sustainable lunar exploration and keeps our eyes on missions farther into the solar system, including Mars.”

Musk probably can’t wait. He tweeted that if humanity seeded life on multiple planets, there could be a day when some plants and animals go extinct on Earth, but are still alive on Mars.