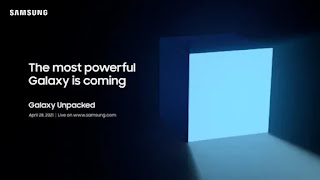 Over the years, Samsung has organised a series of signature launch events that the company called Unpacked. Since two of such events have taken place in January and March, we thought that the next Unpacked event would take place in the second half of the year but turns out we were wrong.
This morning, Samsung has announced that the third Unpacked event of 2021 will take place on 28 April. As per tradition, the company has also published a trailer for it:

At first, it is hard to guess the product that is being referred to by the trailer although it seems to be pointing to a device with a clamshell form factor. The only real clue is that the Unpacked event will be featuring “the most powerful Galaxy,”.

While this doesn’t apply to Malaysia, the Samsung Galaxy family in other markets also covers laptops which we believe are related to the clue since the laptop’s processors are way more powerful than those that are equipped into phones. In fact, two such devices were leaked last month including the Galaxy Book Pro and Galaxy Book Pro 360.

Furthermore, the 28 April Unpacked event was not highlighted on Samsung Malaysia’s website, unlike the previous two Unpacked 2021’s event. Any Samsung products that are not meant for Malaysia would not be featured on the website, so this seemed to signify that the products that will be shown at the event will not be available in our market. 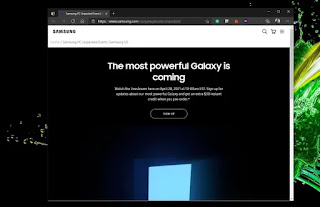 Once we visited the Samsung US website, we then noticed that the address and title of the mini-site for the 28 April’s Unpacked event clearly linked it to Galaxy Book devices. So, it is possible that you could be disappointed if you are hoping to see a new Galaxy phone or tablet on 28 April but nevertheless, we will keep you posted with updates from the event.

at April 20, 2021
Email ThisBlogThis!Share to TwitterShare to FacebookShare to Pinterest
Labels: 28April, an, Event, for, NewGalaxyBooks, on, Samsung, Schedules, Unpacked