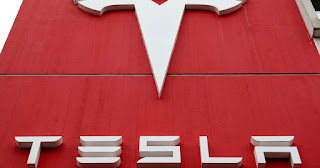 Tesla reported first-quarter results on Monday, including a record quarterly net profit of $438 million on a GAAP basis.
As usual, those profits were buoyed by sales of environmental regulatory credits. But in a new wrinkle this quarter, the company’s sales of bitcoin during the quarter also contributed $101 million toward the bottom line.In February, Tesla made waves when it announced a $1.5 billion purchase of bitcoin and said it may continue investing in cryptocurrency more broadly.On Monday, Tesla’s shareholder update revealed that sales of bitcoin made a $101 million “positive impact” to the company’s profitability during the period ending March 31, 2021.On the company’s cash flows statement for Q1 (page 26), it recorded $1.5 billion in purchases of “digital assets,” as well as $272 million in proceeds from sales of digital assets during the quarter.Elsewhere (page 5), the company says its profitability was helped from a sale of bitcoin which contributed a $101 million “positive impact, net of impairments, in ‘Restructuring and Other.’” This shows up as a $101 million reduction in operating expenses on the company’s Statement of Operations (page 24).This suggests that the company quickly flipped some of its big bitcoin purchase for a gain of $101 million, as bitcoin prices rose during the quarter.As CFO Zachary Kirkhorn said during the earnings call, “Elon and I were looking or a place to store cash” that wasn’t immediately being used to get returns. But they had a need to be able to access their cash quickly too.“Bitcoin has proved to be a good decision. A good place to put some of our cash that’s not being used for daily operations…and be able to get some return on that.” Kirkhorn added that while they were pleased with the liquidity of the bitcoin market, “It is our intent to hold long-term.”Tesla does accept bitcoin payments from customers now.But apart from that, it’s not clear how investments in and use of cryptocurrency serve the mission of Elon Musk’s electric vehicle and energy storage business. The stated mission of Tesla has long been to “accelerate the world’s transition to sustainable energy.”Vicki Bryan, founder of the bond investment research firm Bond Angle, wrote in an e-mail to CNBC:“Bitcoin is not fungible or logically advantageous as currency, arguably not safer for the owner vs cash in transactions, and inexcusably damaging to the environment.”Tesla had historically racked up around $1.6 billion in regulatory energy credits, primarily zero emission vehicle credits, Bryan notes. Credit sales helped Tesla to report more than four consecutive quarters of profitability, qualifying Tesla for addition to the S&P 500 index.With Tesla’s bitcoin purchases, Bryan says, Tesla is adding a volatile asset with limited reported visibility to financial statements which “already conceal vital clarity of key operations and financial conditions.”
at April 27, 2021
Email ThisBlogThis!Share to TwitterShare to FacebookShare to Pinterest
Labels: $101m, Bitcoin, Profit, Sold, Tesla