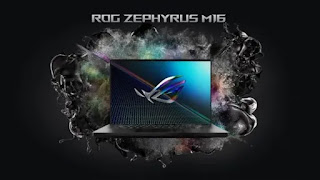 ASUS officially revealed its latest ROG Zephyrus laptop lineup recently, which includes both new and refreshed models. Among the latest additions, one gaming laptop that stood out is a redesigned ROG Zephyrus M16.
Cutting to the chase, one of the highlights of the new M16 is its larger screen-to-body ratio display that measures 16-inches, and is crammed into a 15.6-inch body. Moreover, it offers a four-sided, narrow bezel panel that in turn provides a display ratio of 16:10. Adding on to that, the display has a maximum resolution of 2560 x 1600 pixels, plus a maximum refresh rate of 165Hz and 3ms GTG response time. Oh, it’s also Pantone Validated and has a maximum brightness level of 500 nits.

On a side note, the M16’s display also sports a super-slim 2MP webcam, which is nothing short of a feat, given how limited space already is on the panel. 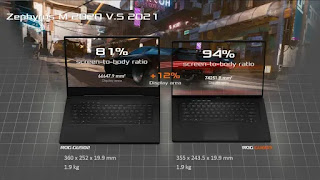 As for heat dissipation, both the CPU and GPU are connected by six heat pipes, which are cooled by Arcflow fans. Each equipped with 84 blades and feature ASUS’ self-cleaning Anti-Dust 2.0 system. Last but not least, despite all that hardware, ASUS has managed to keep the weight of the laptop under 2kg. Specifically, it weighs in at 1.9kg. 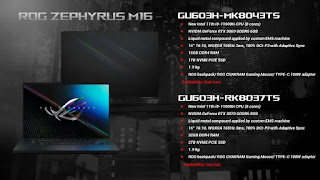 As for how much the ASUS ROG Zephyrus M16 costs, the brand has yet to specify that detail. However, ASUS will be releasing two SKUs of it, one at the end of June, while the higher-tier SKU will be made available at the end of July.
at May 17, 2021
Email ThisBlogThis!Share to TwitterShare to FacebookShare to Pinterest
Labels: 11thGenCPU, Asus, GalaxGeforceRTX30, Intel, Laptop, Launches, M16, NVIDIA, ROG, SeriesGPU, With, Zephyrus