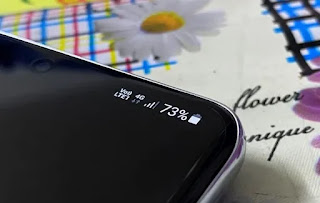 The impact of the Movement Control Order (MCO) on data consumption in Malaysia has been well-documented by various parties including the Malaysian Communications and Multimedia Commission MCMC) itself. However, a new report from Opensignal has shown that the demand for mobile data in our country is generally much higher than in other Southeast Asian countries.
Using data that was gathered from January 2020 to March 2021, Malaysia mobile data consumption has steadily increased from February 2020 before hitting the first peak in April 2020 which coincides with the early part of MCO 1.0. The demand then drops before it steadily picked up again from July 2020 onwards and reached the second peak in February 2021. 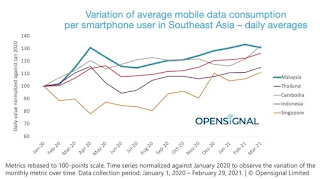 With an average consumption rate of 26.4GB per user in January 2021, it is apparently the highest in Southeast Asia: 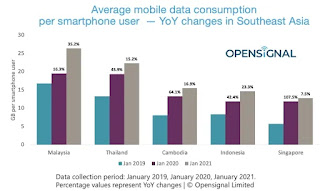 Opensignal has noted in its report that the massive surge of mobile data consumption showed that telcos in Malaysia faced a greater challenge as compared to their counterparts in other SEA countries.

Similarly, this may explain why some local telcos such as Celcom and Maxis have recently experienced noticeable declines in terms of speed. On another hand, the analytical firm was also quick to point out that JENDELA may help things become better.

at May 15, 2021
Email ThisBlogThis!Share to TwitterShare to FacebookShare to Pinterest
Labels: Consumption, countires, Data, higher, is, Malaysia, Mobile, Opensignal, Other, SEA, Than, way