Following backlash to the initial privacy policy change, WhatsApp said in February that users can voluntarily accept it before 15 May. Though if you don’t, you’ll slowly get its usability limited. It looks like the company has detailed what will happen if you don’t agree to it sharing data with Facebook.
BleepingComputer found a new WhatsApp FAQ page that details exactly what sort of functionality you will lose. Though not all of it is new. To start, post 15 May, those who have not accepted the new terms will start getting persistent reminders to do so.

Following that, continued refusal will see you losing access to your WhatsApp chat. You can still accept calls but calling back missed calls can only be done via notifications. The same goes for replying to texts; you can get them, but replying is only possible via notifications. A version of this was detailed back in February, with some variations. 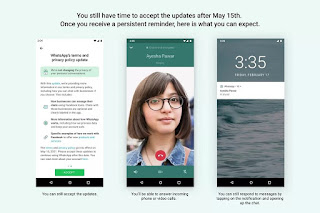 But what happens after that? The new FAQ page says after a few weeks of this limited functionality, WhatsApp will stop sending you anything altogether. No calls, texts, or even notifications.

Your account will, in effect, become practically deactivated. That being said, the page was not clear if this constitutes as actually being inactive, and thus being subject to the 120-day deletion rule, since your device can still connect to the internet with WhatsApp running.

It’s probably worth reminding that, following the initial uproar, the company did remind users that the data sharing with Facebook only applies when messaging applicable businesses. But whether or not this changes anything, it’s still up to each individual user to decide.