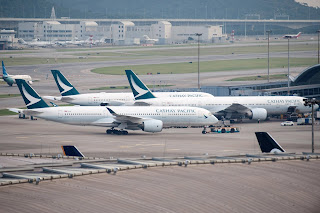 Struggling Hong Kong carrier Cathay Pacific on Wednesday reported a $972 million net loss in the first six months of 2021 as the pandemic continues to hammer demand for travel.

And while the figure is an improvement on the $1.3 billion loss suffered in the same period last year, the airline said the outlook remained uncertain owing to ongoing struggles to battle the disease.

Chairman Patrick Healy said 2021 continues to be the “toughest period” in the airline’s 70-year history, but the progress of global vaccination drives provided some encouragement for the industry.

“Covid-19 will continue to have a severe impact on our business until borders progressively open and travel constraints are lifted,” he warned.

With no domestic market to fall back on, Cathay Pacific has been among the worst hit of the major global airlines.

In the midst of the pandemic last year Hong Kong’s government came to the rescue with a major bailout.

Hong Kong has kept coronavirus cases low by effectively sealing itself off to most of the world for the past 18 months, a move that has kept people safe but crippled the travel industry.

Earlier this month authorities lifted some of those restrictions meaning visitors without work visas or residency would now be able to travel to the city. But they will still have to undergo between 7-21 days of hotel quarantine depending on where they have come from.

Cathay Pacific carried just 157,000 passengers in the first half of the year, 96 percent fewer than in the same period in 2020. The company made just $96 million from passenger flights during that period.

Instead it is air cargo keeping the airline on life support, generating four fifths of revenue.

Healy said the firm hoped to be operating at around 30 percent of its pre-pandemic passenger capacity by the fourth quarter of this year.

But much will depend on “operational and passenger travel restrictions being lifted”.

“As governments have stated, this is only going to be possible when sufficiently high vaccination levels are achieved. The progress of vaccination is encouraging, but the pace and timing of recovery remain uncertain,” Healy added.

“It’s not just the reopening, but also since their Europe flights are seeing 40 percent load factor in June and China flights are also not bad at 29 percent. This could improve with the reopening,” he said, referring to Hong Kong gradually relaxing its entry rules.

Shares in Cathay rose 1.61 percent in afternoon trade, following the release of the earnings report.