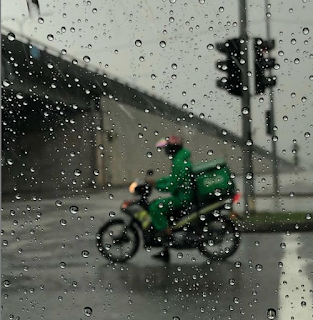 Another day of work, another day for him to get by. The alarm rang at 5 a.m. He woke up feeling a heavy sore surging through his body because of an incident that happened the day before. Nobody knew he had been driving for 12 hours straight, every single day for the past year. His usual routine includes his simple breakfast at 5.30 a.m, followed by lunch at 8 p.m. The pain in his back and the hunger in his stomach were nothing compared to the worries in his mind: "Will I make enough deliveries today to cover the bills?"𝘉𝘰𝘺 𝘰𝘩 𝘣𝘰𝘺 𝘥𝘪𝘥 𝘐 𝘸𝘪𝘴𝘩 𝘩𝘦 𝘨𝘰𝘵 𝘰𝘧𝘧 𝘸𝘰𝘳𝘬 𝘦𝘢𝘳𝘭𝘺 𝘰𝘯 𝘴𝘰𝘮𝘦 𝘥𝘢𝘺𝘴.It was a fine Thursday, he made a few deliveries for all kinds of cuisines. And then came an order for Spade's Burger. He let out a huge sigh, he never liked delivering orders from Spade's or myBurgerLab (you know how long the queue can get). Customers were always rushing him to get the food there "faster". But how fast can you wait, when there are 10 other drivers waiting to deliver to their customers as well?6PM - It was almost time for dinner but he wanted to take one last job for the day before he went home to have dinner with his kids. Then the next notification came in: -The job was from Sopoong, a Korean food restaurant. It took him less than 5 minutes to get to the restaurant. He then went in to greet the owner and inform him of the orders. The owner looked him up and down with a displeased look on his face and said, "𝗚𝗿𝗮𝗯 𝗱𝗿𝗶𝘃𝗲𝗿𝘀 𝘄𝗮𝗶𝘁 𝗼𝘂𝘁𝘀𝗶𝗱𝗲"So, the waiting begins...[30 mins later] the first message from the waiting customers arrives:"𝗪𝗵𝘆 𝘁𝗵𝗲 𝗳𝘂𝗰𝗸 𝗶𝘀 𝗺𝘆 𝗳𝗼𝗼𝗱 𝘁𝗮𝗸𝗶𝗻𝗴 𝘀𝗼 𝗹𝗼𝗻𝗴 𝘁𝗼 𝗮𝗿𝗿𝗶𝘃𝗲?"The grab driver started to panic and went into the restaurant to follow up with the order, just to be greeted with a glare. The restaurant owner raised his voice, "𝗡𝗢𝗧 𝗥𝗘𝗔𝗗𝗬! 𝗚𝗿𝗮𝗯 𝗱𝗿𝗶𝘃𝗲𝗿𝘀 𝗼𝘂𝘁𝘀𝗶𝗱𝗲!"The grab driver apologized and explained to the customer that his order was still in preparation. Then came the next reply:"𝗜'𝗺 𝗴𝗼𝗶𝗻𝗴 𝘁𝗼 𝗴𝗶𝘃𝗲 𝘆𝗼𝘂 𝗟𝗢𝗪 𝗥𝗔𝗧𝗜𝗡𝗚"The grab driver waited another 20 minutes before the food was ready. He quickly grabbed the food and drove as fast as he could. When he saw the customer, the first thing he did was apologize, "I'm sorry sir, the kitchen was very busy and I tried my best-" before he was cut off with:"𝗬𝗢𝗨 𝗝𝗔𝗡𝗚𝗔𝗡 𝗞𝗨𝗥𝗔𝗡𝗚 𝗔𝗝𝗔𝗥"The grab driver was stunned and didn't know what else to do except to pass the food. What happens next?
The customer took the packaging that includes a piping hot bowl of soup and threw it back at the grab driver.It was a really long day for the driver. He felt tired, confused, and upset. It's not the first time he was greeted with harsh remarks, curses, and impolite customers. Instead, he reminds himself to be grateful only because he still has a job during this pandemic.And before you wonder any further - how do I know this story? Because the grab driver is my father. He was 2 hours late for our dinner. His clothes were damp. His skin had burnt spots. His eyes were puffy.He carries all these frustrations and emotional scars in his heart, it pains me to share the fragments and details of this story.It hurts me, even more, knowing that my father is the victim of emotional and physical abuse. Could you stand to see your father get bullied and all you could do is pat them on the back and tell them 'everything is going to be okay?'Nobody knows when MCO will end. Many families are suffering, many businesses are feeling the pinch. Many hopes and dreams are crushed - and there's not much we can do to reverse our fate from this nasty, unforgiving pandemic.

This is what Grab drivers have to go through daily. They wait for hours, risk their lives on the road to deliver food - only to be treated with disrespect, emotional abuse, an endless string of insults while being at the mercy of an app that users can rate depending on their mood & standards.