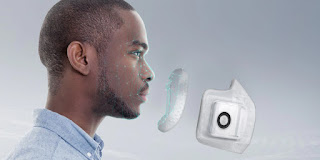 LG has announced that it will be updating its Puricare Wearable Air Purifier mask with slight improvements and new features. Most interestingly is the new addition of microphones and speakers, which makes it easier to have conversations while wearing the mask.

LG calls this new feature VoiceON technology, which is claimed to automatically recognise when the wearer is talking via the built-in microphones and will then amplify their voice through the speakers. There’s no demo of this technology in action at this time but hopefully it would provide a better experience than the original, which has been reported to significantly muffle the user’s speech.

Other than that, the updated air Puricare Wearable Air Purifier mask will sport a smaller, lighter and more efficient motors for its dual fans. Battery life also gets a bump with a larger 1000mAh battery (up from 850mAh) which charges within 2 hours. And it’s not just the motors that got lighter, as the whole mask itself now weighs only 94g (the original was 126g).

It’s also worth noting that LG’s VoiceON feature is quite similar to Razer’s VoiceAmp technology, which will be present in Razer’s Project Hazel mask that is due to be released later this year. Unlike Razer’s, the South Korean giant’s mask does not feature interior lighting to light up the wearer’s mouth, but it does have a cleaner aesthetic for the minimalists.

While LG has yet to reveal the price, it noted that the mask will first launch in Thailand next month, “with other markets to follow once approved by local regulators.” Unfortunately, the mask is not officially sold in Malaysia, but it is made available in Singapore for SGD $229 (~RM710).

at August 01, 2021
Email ThisBlogThis!Share to TwitterShare to FacebookShare to Pinterest
Labels: and, its, LG, Mics, PuricareAir, PurifierMask, Speakers, Update, will, With