While people are naturally more concerned about the double blue ticks, WhatsApp has another privacy feature in the form of the Last Seen status. Like the blue ticks, you can either let everyone see it, or no one at all. But the messaging app may be working to change that, allowing users to hide it from specific individuals.

WABetaInfo reports that the feature is currently in development. In an iOS screenshot, the privacy setting has a new option that reads “My Contacts Except…”. This is in addition to the existing three, which are Everyone, My Contacts, and Nobody. 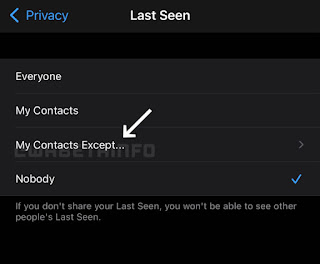 By default, it would probably be rare that the basic My Contacts option sees any use. But with exceptions, you will at least have the option to, for example, hide your Last Seen status from professional contacts if you use the same number for work as you do your private life.

As is usually the case, there’s no indication as to when this new privacy option will go live. For what it’s worth, it will likely show up on both iOS and Android versions of WhatsApp. But again, it’s always possible that both platforms get the new option at different dates.