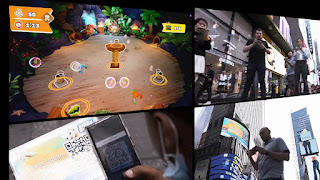 Malaysian-made video game Bake ‘n Switch was put in quite the spotlight earlier this month when it was played on a billboard in Times Square, New York. This was done as part of a public test of a digital billboard and mobile gaming hybrid.

The two day test was held on 8 and 9 September, making use of the Mega Screen, and a custom version of the Bake ‘n Switch game by Streamline Games. Up to six visitors to the site were able to join in the game to support two other players competing against each other. All that needed to be done was scanning a QR code with their phone, and without having to download or install anything.

The test using the modified version of Bake ‘n Switch was dubbed Project Monarch, and served to highlight the potential of what’s called mobile crowd gaming. It was done using the Intel’s Smart Edge and Genvid’s interactive livestreaming tech, as well as a 5G-connected hotspot.

The idea is that, on a larger scale, the number of participants won’t be limited to just eight people. GamesBeat reports that up to 750000 concurrent users can be participants at a time with a larger-scale deployment. Though while it’s an impressive showing of the tech involved, one can imagine the actual chaos gameplay would be if that number of players had more active roles rather than just supporting with tap-mashing their screens.

at October 06, 2021
Email ThisBlogThis!Share to TwitterShare to FacebookShare to Pinterest
Labels: Bake, Billboard, Gets, N, NewYork, on, Played, Switch, TimesSquare