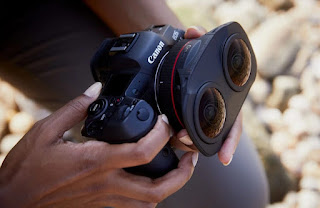 Canon’s latest product announcement has caught most people off-guard. Instead of a new camera or a traditional lens, its newly revealed product is a dual fisheye lens that allows you to shoot content specially viewed on VR or AR headsets.

Known as the RF5.2mm F2.8 L Dual Fisheye, the new lens is designed to be used together with Canon’s high-end mirrorless cameras such as the EOS R5 – taking advantage of their large CMOS sensors to capture and deliver high quality content. Undeniably, its design may seem unusual for most users – featuring two bulging fisheye lenses on a flat surface that is attached to an RF mount connector. When attached to a compatible EOS camera, it does give you an impression that your camera either has a new pair of eyes or, amusingly, a snout. 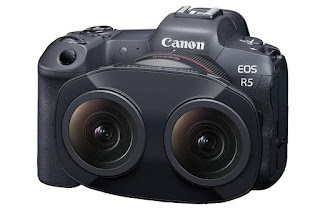 But as bizarre as it looks, the whole point of its design is to enable your camera to capture up to 190-degree stereoscopic high resolution 3D footage or photos, while at the same time giving them a perception of depth. Other than that, Canon says it features coatings to control flare and ghosting, a F.28 to F16 aperture range, as well as dust and water resistant sealing.

Oh, and the Dual Fisheye is manual-only, by the way. Much like most lenses, it features a ring that adjusts the focus on both lenses simultaneously. There’s also an Allen screw adjustment that enables you to calibrate the focus on one lens if required. 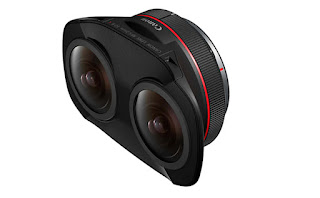 Canon also announced a forthcoming firmware update for compatible cameras which would enable them to support the lens and the company’s new EOS VR system. Included in the update are new features such as MF (manual focus) peaking and Magic Window UI that aids users to customise their footage or photos for different types of VR/AR headsets.

Concurrently, new EOS VR Utility and EOS VR Plugin applications have also been introduced. These allow users to edit footage captured with the Dual Fisheye with a variety of tools for customising its resolution output and export format (DPX, Pro Res, H264, etc.). Last but not least, Canon will release an EOS VR plugin for Adobe Premiere as well.

The new Canon RF5.2mm F2.8 L Dual Fisheye is slated to be released in select markets in late December 2021 and will retail at US$1,999 (RM8,362). The company has yet to announce whether the lens will be making its way to Malaysia in the foreseeable future.
at October 05, 2021
Email ThisBlogThis!Share to TwitterShare to FacebookShare to Pinterest
Labels: Canon’s, Compatible, Dual, Fisheye, Latest, Lens, Lets, Shoot, Videos, VR, you