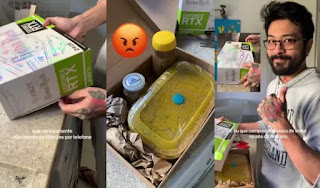 Ah, scammers. As much as many of us hate these degenerate sub-species of the human race, they are, unfortunately, a difficult bunch to properly be rid of. Recently, a man in Brazil recently fell victim to a scam when he made an order on Amazon and got a whole load of sand, literally.

The Brazillian man, whose name is Mauricio Takeda, had posted his plight on the social media platform, TikTok. Here’s the story: Takeda had pulled the trigger and decided to purchase an NVIDIA GeForce RTX 3090 Ti graphics card from Amazon Brazil. What makes this purchase extra special, though, is that the multinational brand was also having its Prime Days sale period, which in turn meant that products were being sold at a discount.

In Takeda’s case, his Palit GeForce RTX 3090 Ti GameRock graphics card was purchased for 14500 Brazillian Real (~RM12179). If we’re being honest here, that’s still a little on the high side, and that is despite the fact that the prices of graphics cards have been on a steady decline or if you’re in China, crashing hard.

Upon receiving his newly purchased “GPU” in the mail from Amazon, red flags began to rise for Takeda when he picked up the package and realised something was very clearly off with its weight. With his suspicions already at a heightened state, he then proceeded to ask his wife to record him opening the package and, upon doing so, discovered that he was not, in fact, an owner of a new RTX 3090 Ti, but multiple jars and pots filled with sand.

But Takeda’s story doesn’t even end there. Realising that he was a victim of a very expensive scam, he attempted, attempted, to liase with Amazon, asking them for a resolution, but to no avail. Then, after repeatedly receiving calls from the centre over a course of several days, they finally sent him an email containing a link that would permanently remove the affected Amazon account.

Takeda ultimately got restitution, though, after he filed a lawsuit in the Brazillian Small Claims Court and his issue actually became a national headline. At that point, even Amazon couldn’t take the issue lightly and began to fix the problem.
at July 28, 2022
Email ThisBlogThis!Share to TwitterShare to FacebookShare to Pinterest
Labels: Amazon, from, Man, Orders, Receives, RTX3090Ti, Sand