It may have been more than 27 years since the first chapter of Initial D was released in the Weekly Young Magazine but the popular manga and anime series continues to have a massive impact on automotive and pop culture today. Its legacy lives on through another manga series called MF GHOST and both titles have recently been honoured by Casio through a specially-themed Edifice Sospensione ECB-2000 watch that has just made its way to Malaysia.

The new watch was made possible through a collaboration with Shuichi Shigeno who was the creator of both highly acclaimed motorsports-themed series. For starters, the special edition Casio Edifice Sospensione ECB-2000MFG-1A is draped in the same red-black colourway as per the Toyota 86 GT that was driven by the main characters of MF GHOST, Kanata Rivington. In addition to that, the name of the racing courses from MF Ghost is featured on the upper side of the Cordura-based watch band. Casio has also added the famed Fujiwara Tofu Shop name in Japanese on one of the band’s underside sections in the exact same font used on the Takumi Fujiwara’s Toyota Sprinter Trueno AE86, the hero car from Initial D.
On the other underside section of the band as well as the background of the watch face, there is also a set of Japanese characters “ギャァア” that is a common view inside the manga of both series and is meant to represent the sound made by tyre screeching during corners. In addition to that, the watch’s metal band loop has also been laser-engraved with a tyre track, to further represent the motorsport vibes from Initial D and MF GHOST. 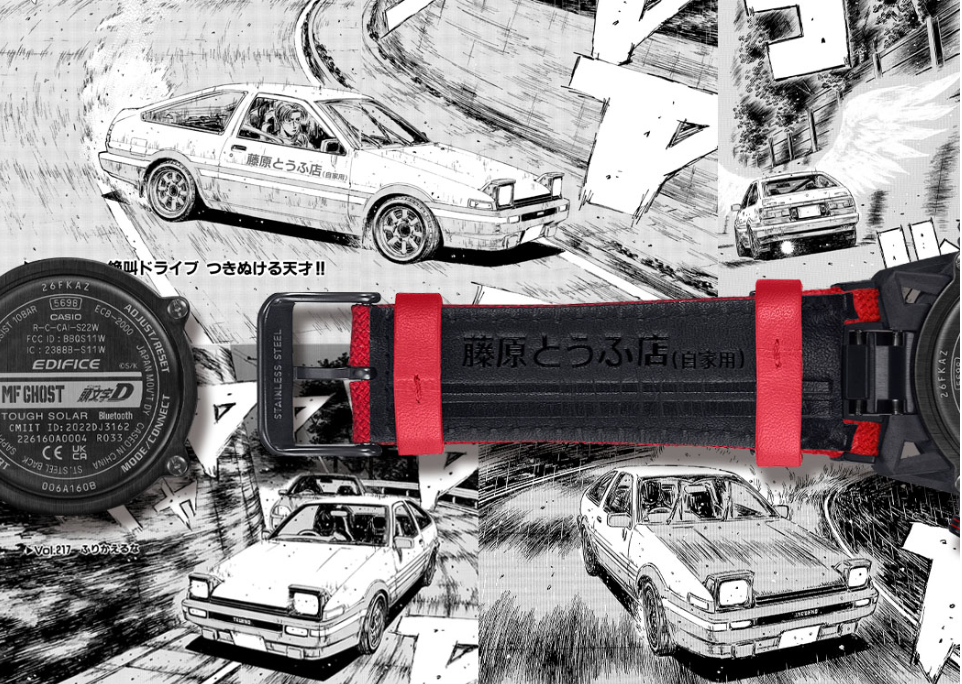 Furthermore, the Casio Sospensione ECB-2000 itself already featured a suspension arm design that was inspired by the suspension system on open-wheeled racing cars which further highlights the watch’s motorsport inspiration. Last but not least, the logo of both series has also been etched on the watch’s IP black case back.