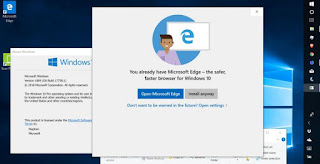 New pop-up notifications are appearing in the lastest Windows 10 test build. When users install third-party browsers such as Chrome or Firefox. The prompt notifies users that Microsoft’s Edge is “the safer, faster browser for Windows 10” as they run installers for the alternative web browsers.


This prompt was spotted in the Windows 10 October 2018 Update by testers who tried to install browsers other than Edge. Thankfully, The Verge updated that this prompt is only running during the test period and will not appear in the final build of the October 2018 Update. 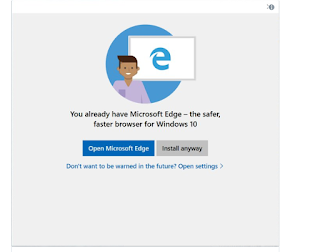 To be fair, this isn’t the first time Microsoft has pulled these sort of unsolicited prompts in Windows 10. Previous Windows updates also included pop-up notification in the task bar. Promoting both Microsoft Edge and OneDrive services to users. Similar prompts also appeared in Windows Explorer to select users.
Unfortunately these new pop-ups are part of the drawbacks of having Windows 10 as a service. While speedy updates and fixes is now the norm, Microsoft is also using that instant gratification mindset to directly target users with ads and unsolicited prompts. We hope the test and feedback from affected consumers will deter Microsoft from continuing on this path with all future Windows updates.