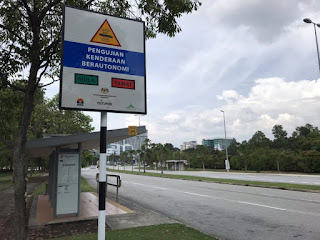 Futurise, a subsidiary of Cyberview Sdn Bhd under the Ministry of Finance, has revealed that the Cyberjaya MyAV Testing Route has been approved for use by the Ministry of Transportation (MOT) and the Sepang Municipal Council. The route is developed by the company, together with MOT under the National Regulatory Sandbox initiative for the future development of autonomous vehicle project.
The MyAV route is intended for tech companies to test the capabilities of their self-driving vehicles in Malaysia, before determining whether the technology is allowed to be implemented or certified by authorities. The approval is expected to see more companies participating in utilising the test course to evaluate and develop their autonomous vehicles. 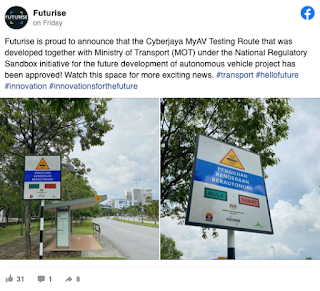 According to a report by The Malaysian Reserve, Cyberview head of business Roni Shah Mustapha said that technologies such as these can serve as the first and last-mile connectivity in Cyberjaya. “We are also talking to a few players on the potential of having autonomous buses that can be tested here, as well as the provision of electric buses which can be operated at a cheap rate in this area,” he said during a webinar held in August this year. 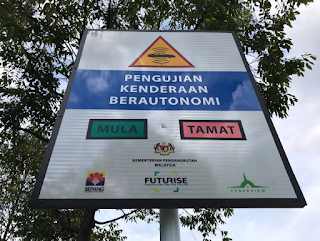 Signages that indicate the starting and ending points of the route have been set up in Cyberjaya, as pointed out by a Facebook post by Futurise. These also serve to provide awareness and caution to the public that a test vehicle may be on the road at certain times. So if you happen to see a current or newer version of a yellow Volkswagen beetle driving on the route with no driver present, it is likely an autonomous vehicle in testing. Probably.

Jokes aside. Aerodyne Group vice president Richard Ker suggests that one of the vehicles that will be tested on the MyAV route is likely a self-driving Proton Exora. It is believed that the vehicle is the same model used last year by Celcom to showcase its 5G network, with the help of Ericsson and MooVita.

at November 22, 2020
Email ThisBlogThis!Share to TwitterShare to FacebookShare to Pinterest