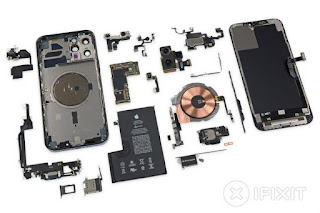 Having torn down the three different iPhones of the year, the folks at iFixit have finally done the same to the iPhone 12 Pro Max. And with this teardown, we get a look at the tech, and size, of its camera. Specifically, the very impressive sounding sensor-shift image stabilisation.
Despite sporting the same 12MP main camera, the one on the iPhone 12 Pro Max is about 47% larger than the base model. This is mainly down to the sensor shift image stabilisation tech. As mentioned during its launch, this tech allows the sensor itself to shift whenever your hands shake while taking shots. And as mentioned, this is usually tech found in modern DSLR and mirrorless cameras. 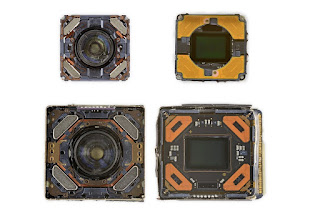 Another highlight here is the return of the L-shaped battery. While it’s something that has made appearances in previous models, it’s something not found in the other iPhones of the year. It’s also marginally smaller than last year’s Pro Max model’s battery.

All in all, the iPhone 12 Pro Max, like the other iPhones of the year, gets a reparability score of 6/10. It shares mostly the same pros and cons as the previous devices. And one key pro among them being modularity of components, leading to easier repairability. Not that you’d want anyone besides Apple itself to deal with that.

at November 23, 2020
Email ThisBlogThis!Share to TwitterShare to FacebookShare to Pinterest
Labels: Iphone