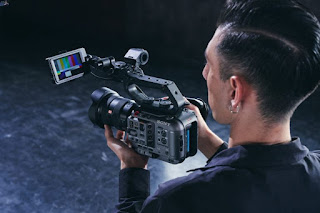 Sony has announced its new FX6 full-frame cinema line camera which is due to launch locally by early next year. The company touts the video camera to feature its cinema technology and form factor, along with advanced imaging technologies that make up its Alpha mirrorless camera systems.
The Sony FX6 features a modular design, allowing for different mods to be attached to various locations on its body – including its 3.5-inch LCD viewfinder. The camera’s body is constructed of a magnesium alloy chassis that measures 11.6cm x 15.3cm x 11.4cm, and weighs 890g. It also includes support for interchangeable lenses via its built-in E-mount, which enables it to be compatible with more than 50 native lenses from the company, as well as a wide variety of third-party lenses.
The FX6 packs a 4K 10.2MP full-frame back-illuminated CMOS Exmor R sensor, paired with its own Bionz XR processing engine. According to the company, the sensor is capable of offering more than 15 stops of dynamic range and has a maximum ISO of 409,600 for shooting videos in low-light conditions. Also onboard is a 627-point Fast Hybrid AF system with advanced autofocusing features such as Face Detection and Real-time Eye AF. 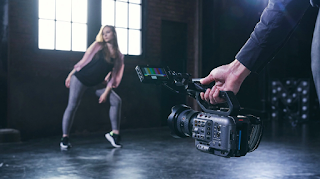 The camera is able to capture 10-bit 4:2:2 footage in full-frame 4K resolution at 120fps, or 1080p at 240fps. In addition to this, users could also output 16-bit SDI Raw 4K/60p video by utilising its onboard 12G-SDI port. Included is Sony’s S-Cinetone profile that is based on its VENICE colourimetry, which it claims is designed to quickly and easily create rich looking final content without the need for expensive post production. There’s also internal electronic variable ND filters that can be manually adjusted in increments from 1/4 to 1/128.
Other than that; the FX6 features built-in WiFI, four-channel audio recording, compatibility with Sony’s Catalyst Browse and Prepare software, as well as the brand’s Content Browser app for mobile devices. Storage-wise, the new video camera is equipped with two CFexpress Type-A card slots, which are also backwards compatible with SD UHS-II cards.

The Sony FX6 full-frame cinema line camera is slated to launch in Malaysia in January 2021. However, the company has yet to reveal the local pricing for its newly announced device.

at November 20, 2020
Email ThisBlogThis!Share to TwitterShare to FacebookShare to Pinterest
Labels: Sony Camera