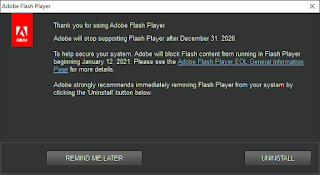 If you have installed a recent version of Adobe Flash Player on a Windows machine, you may see a popup displayed by the program that informs you that Flash support is ending on December 31, 2020.Adobe announced years ago that it would end support for Adobe Flash in 2020; browser makers such as Google, Microsoft or Mozilla pledged to remove Flash functionality from web browsers at the same time to limit security issues and other potential issues.Some browsers include Adobe Flash natively; most Chromium-based browsers, including Google Chrome and Microsoft Edge, do. Other browsers require a plugin that needs to be installed, and it is users of the latter that Adobe tries to reach with its popup message.Flash Player's update check, run once every seven days, displays the popup when it is run the next time. Users have options to select "remind me later" or to "uninstall". The latter starts the uninstallation process, the former will display the warning again in the near future.
at December 31, 2020
Email ThisBlogThis!Share to TwitterShare to FacebookShare to Pinterest
Labels: 2020, Adobe Flash