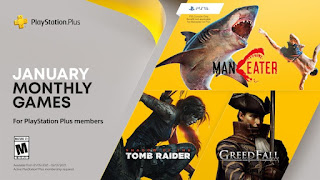 PlayStation Asia waited until the very last day of the year to reveal next month’s free games for PS Plus subscribers. And it looks like a pretty good lineup too, consisting of three titles.
Headlining the free games is Shadow of the Tomb Raider. It’s the last game in the reboot trilogy, which can stand alone pretty well even if you haven’t played the earlier entries. The Challenge Tombs are great, and it has a Photo Mode to help you make the most of it.
The second game that’s free next month is Greedfall. It’s a fantasy action RPG that may remind you of the likes of The Elder Scrolls and Dragon Age. There’s a meaningful crafting system, different builds for different playstyles, and even branching story paths.
And the third one, specifically for the PS5, is Maneater. It was first released for the PS4 this year, but for some reason the free version is only for the new-generation console. But either way, it’s a game of mindless fun like Jaws Unleashed for the PS2. There are some new mechanics like skills, but it’s still essentially the same thing.

These free games for PS Plus subscribers will be available between 5 January and 1 February 2021. If you haven’t claimed this month’s games, better get them now before they are gone.