Covid variant in South Africa is ‘more of a problem’ than the one in UK, official says 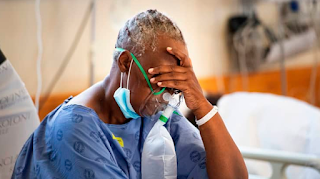 A new variant of the coronavirus that has been identified in South Africa is more of a risk than the mutation found in the U.K., according to Britain’s health minister.

Health Secretary Matt Hancock said the mutation found in South African was very worrying.A variant of the coronavirus identified in South Africa is more problematic than the mutation found in the U.K., Britain’s health minister said Monday, as both strains spread rapidly.Health Secretary Matt Hancock told the BBC the variant found in South Africa was especially concerning.“I’m incredibly worried about the South African variant, and that’s why we took the action that we did to restrict all flights from South Africa,” he told the BBC’s “Today” program.“This is a very, very significant problem ... and it’s even more of a problem than the U.K. new variant.”Both countries are struggling with a surge in Covid-19 infections, which have been attributed in large part to mutations in the virus that make it more transmissible.The U.K.’s new variant was first identified in Kent, southeast England, in December. The U.K. authorities alerted the World Health Organization to its emergence.Experts note that while the new variant spreads more easily, it does not appear to make it deadlier. Nonetheless, the U.K.’s hospitals are under pressure from a dramatic rise in infections and admissions.Vaccine effectivenessQuestions have been raised over how the coronavirus vaccines will work against the new variants.Several experts have said they expect vaccines — such as those from Pfizer and BioNTech, and the Oxford University/AstraZeneca — to protect against the new strains.Earlier in December, WHO chief scientist Dr. Soumya Swaminathan tried to allay fears over the variants, telling the BBC it was “very unlikely” that the latest mutations would cause the current vaccines not to work. The WHO has said further investigations are required “to understand the impact of specific mutations on viral properties and the effectiveness of diagnostics, therapeutics and vaccines.”Dr. John Bell of Oxford University said Sunday the variant identified in South Africa was worrisome in this regard, however.“They both have multiple, different mutations in them, so they’re not a single mutation,” he told Times Radio. “And the mutations associated with the South African form are really pretty substantial changes in the structure of the (virus’ spike) protein.”He said there were questions as to whether the Pfizer/BioNTech and Oxford University/AstraZeneca vaccines would be “disabled” in the presence of such mutations.The team behind the Oxford University inoculation was investigating the effect of the variants on its vaccine, he said, adding that his gut feeling was that it would still be effective against the strain identified in the U.K., but he was more uncertain about the one identified in South Africa.However, he told the radio station that if the vaccine did not work on this variant, then it was likely the vaccines could be adapted and that would not take as long as a year.More lockdownsCoronavirus vaccines are the only bright spot in a pandemic that continues to rage in the West. On Monday, the U.K. began its rollout of the Oxford-AstraZeneca vaccine after starting to deploy the Pfizer/BioNTech shot in December.In the meantime, restrictions on public life continue and the U.K.’s Prime Minister Boris Johnson has hinted that more restrictions could be introduced in England. Many parts of the country are already effectively under lockdown, with all but essential shops closed and people told to stay at home as much as possible. Still, further restrictions could be introduced in parts of the country with more relaxed measures.The U.K. has now recorded over 2.6 million cases of the virus, and over 75,000 deaths to date, according to a tally from Johns Hopkins University, and the new variant has prompted a surge in infections in London and the South East and is starting to appear in other parts of the country.In South Africa, over 1.1 million cases have been recorded, and almost 30,000 deaths. The new strain has become dominant in the Western Cape, Eastern Cape and KwaZulu-Natal.The variant originally identified in the U.K. has also been discovered in some European countries and the U.S., prompting many nations to ban flights from the U.K. For its part, the U.K. has banned visitors from South Africa.
at January 05, 2021
Email ThisBlogThis!Share to TwitterShare to FacebookShare to Pinterest
Labels: Covid, South Africa