Ray Fisher tweeted Wednesday that Warner Bros. has officially removed him from the cast of the upcoming Flash movie.

"I strongly disagree with their decision, but it is one that is unsurprising," Fisher said, adding that Cyborg's role in The Flash was meant to be larger than a mere cameo.Fisher also reiterated his allegations that DC Films president Walter Hamada protected former co-president Geoff Johns during the studio's investigation of workplace misconduct, and that Hamada allegedly spread "lies and misinformation" about Fisher."If the end of my time as Cyborg is the cost for helping to bring awareness and accountability to Walter Hamada's actions -- I'll pay it gladly," Fisher concluded.Fisher's full statement can be read below. 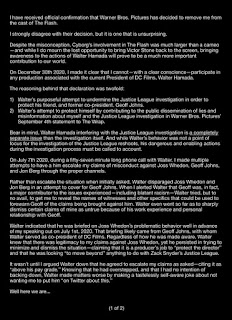 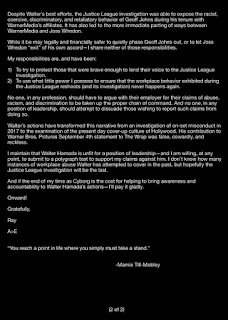 at January 16, 2021
Email ThisBlogThis!Share to TwitterShare to FacebookShare to Pinterest