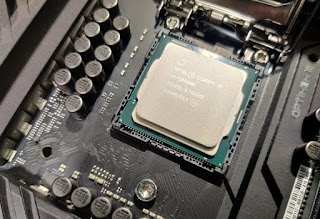 It’s already confirmed that Intel’s 11th Generation Rocket Lake-S CPUs are inbound this year, yet the chipmaker is still being coy about a proper release date. On that note, and thanks to a slip up by MSI, we could be looking at a potential March release for the CPU lineup.
MSI’s loose lips revelation of was made after a Korea-based Twitter user by the name of 포시포시 (@harukaze5719), discovered a post, made via the official MSI-CS Innovation Customer Center. The post itself is a reaffirmation that Intel’s current 400 Series chipset – H410, B460, and Z490 – will support the brand’s upcoming 11th Generation CPUs, with Z490 boards being the first to receive the critical update for it. 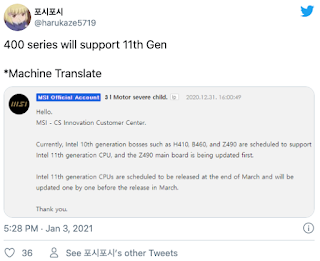 More to the point, the post also follows up its reply with the launch period for Rocket Lake-S, which is the end of March, and that it will update all 400 series mainboards before the launch of the CPU lineup. Unsurprisingly, MSI later updated that reply, removing any specific mention for the launch date of Rocket Lake-S.

Rocket Lake-S’ potential launch window notwithstanding, it’s safe to say we know what to expect from the CPU lineup: the CPU lineup will use the current LGA1200 socket, is based on the near ancient 14nm process node, backported from its new Cypress Cove CPU architecture. More importantly, it will be the first Intel desktop CPU to support PCIe 4.0. 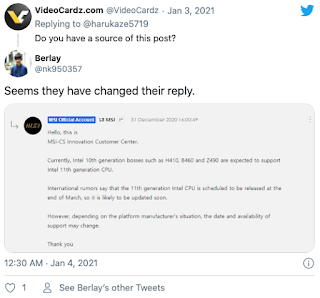 Of course, PCIe 4.0 support isn’t the only thing that has changed for Rocket Lake-S. The CPU lineup will be integrated with Intel’s new Xe graphics core, and its top-tier Core i9-11900K will reportedly have two CPU cores less than its predecessor, the Core i9-10900K. Last but not least, the new CPU lineup will also be launching new 500 series motherboards, despite the backwards compatibility with currently existing 400 series motherboards.

In spite of MSI’s slip up, one point that is certain is that we’ll certainly be hearing more from Intel about Rocket Lake-S during CES 2021, which is just around the corner.