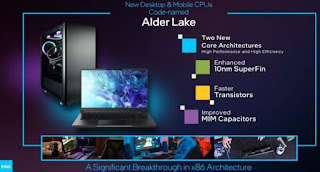 Intel’s 12th generation Alder Lake CPUs aren’t expected for several more months, yet the rumour mill continues to churn out gossip and whispers about the lineup. The most recent rumour now fingering an Alder Lake-P CPU, with the most peculiar number of cores and threads.
According to its listing on Geekbench, the unreleased Alder Lake-P CPU supposedly possesses 14-cores, but only 20-threads. It’s an odd pairing of cores and thread, especially since Intel CPUs traditionally have double the number of threads as cores via Hyper Threading, or an equal number of cores and threads without it.
One possible explanation behind the peculiar cores and threads is the CPU architecture; With Alder Lake, Intel has chosen to move towards a hybrid architecture design that combines high-performance cores with more power-efficient cores. It’s a design template that seemingly mimics ARM’s own big.LITTLE processor design, which has seen widespread application across the board in mobile devices. 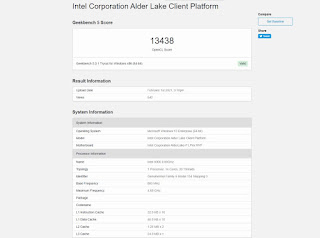 The cores and thread count notwithstanding, the Geekbench page also shows the processor runs at a maximum frequency of 4.7GHz. That isn’t too bad, but it’s also not an impressive number, given that virtually all of Intel’s higher-range CPUs run at boost clocks above 5GHz.

On another note, this isn’t the first leak pertaining to Alder Lake either. Back in January, rumours surfaced about a 16-cores, 32-threads CPU. Additional details pointed to the CPU having a boost clock of just 4GHz, but more importantly, it was also the first mention of Intel’s upcoming 10nm CPU lineup having a consumer desktop CPU with a core and thread count beyond 10-cores.