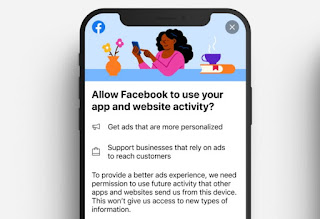 In the next update for iOS 14, iPadOS 14, and tvOS 14, Apple will be implementing the new App Tracking Transparency (ATT) requirement which has received a mix of praise and criticism from all sides of the industry. Among them is Facebook who has responded to the move quite lividly to the extent that it has come out with a full-page newspaper advertisement to oppose the move.

Not only that, its CEO Mark Zuckerberg has heavily criticised Apple during a recent earnings call. Despite that, Facebook has noted that the company will still adhere to the ATT requirement so that Apple users will continue to have access to its services.

In order to mitigate the effect of the ATT pop-up setting which Facebook has called it a “discouraging prompt”, the company is rolling out its own prompt. It will appear before Apple’s ATT prompt and is meant to explain why the company needs to know your app and web activities. 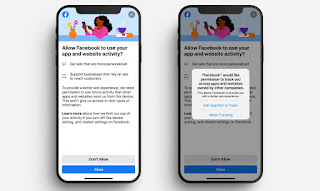 According to a Facebook spokesperson in a statement, “Apple’s new prompt is designed to present a false trade-off between personalised ads and privacy; when in fact, we can provide both. Apple is doing this to self-preference their own services and targeted advertising products.”

The statement further said, “To help people make a real choice, we’re also showing a screen of our own to provide more information about how we use personalised ads, which support small businesses and keep apps free. Agreeing to these prompts doesn’t result in Facebook collecting new types of data; it just means that Facebook can continue to give people better experiences.”

The version shown above is one of several versions that Facebook will begin testing on users starting this week. However, do note that the actual setting is on Apple’s ATT prompt, so make sure to choose wisely on that particular pop-up.