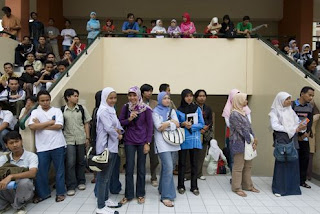 An international human rights group on Saturday called on Indonesia to enforce a ban on religious attire being made mandatory for female students in public schools across the country.Education and Culture Minister Nadiem Makarim announced the ban this week following public outcry after a school in Padang, on Sumatra island, required all female students, including non-Muslim ones, to wear the hijab, or Islamic headscarves."The new decree is a long-overdue step to end discriminatory dress codes for girls and women in state schools across Indonesia," said Brad Adams, Asia director for Human Rights Watch."For two decades, many state schools have required schoolgirls and female teachers to wear the jilbab, leading to bullying, intimidation, and even expulsion or forced resignation," he said.Makarim said a joint decree issued by him, the religious affairs minister and the home affairs minister prohibit state-run schools from forcing students to wear religious symbols or uniforms.Violations could result in the government withholding operational funding and other aid for schools, he said.The rules apply nationwide except in Aceh province, where sharia is in force as part of an autonomy scheme.A video in which a non-Muslim student at a vocational high school in Padang complains about being required to wear a headscarf went viral on social media, prompting the public outcry and ministers' decree.Some schools in parts of the country where Muslims are a minority are also known to have imposed a ban on Muslim headscarves.Indonesia, home to 270 million people, has more Muslims than any other country, but it has a sizeable non-Muslim population as well.
at February 07, 2021
Email ThisBlogThis!Share to TwitterShare to FacebookShare to Pinterest