He also has a first class memory bank, he can remember the names of all KSU-KSU, the results of any meeting that took place 2-3 years ago, statistical figures including oil prices that change every day. Often, we are blindfolded officials because from his head, DS Najib mentioned the numbers (5.9374 for example) that were given to him 4-5 days before. 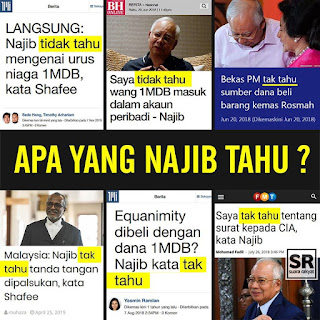 What is DS Najib really like?
I joined the Prime Minister's Office on May 16, 2015 (the story of 1MDB took place before that date).
Although Datuk Seri Najib has many officers but those who are allowed to enter his office room without an appointment or who are allowed to "collide" with him everywhere (to resolve important and urgent matters) are not many, maybe between 8-12 coats. Alhamdulillah, I have the opportunity to hold a position among these.
If I am not mistaken, I am the last special officer to be given the privilege until GE14.
So, the opportunity to get to know him better than other officials. Even so, most of his officers have served him for a long time, some officers have joined since he held the post of Ministry of Defense again.
One thing I found in the PMO was that his officers were factional, and each faction competed to approach DS Najib. To avoid these symptoms, I make sure I am kind to EVERYONE, do not smile and greet everyone.
It's also funny because by taking this position, I heard group A say group B, and Group B say group A. The trick is, we do not deliver ... into the right ear, out the left ear.
Of course, because the PMO is the highest and most powerful executive office in the country, there are some "prime donna" officials (this includes both senior and less senior officers!) But I am happy .. I respect them with the civilization they expect. As far as I know, I have no problem with any party.
I was introduced for the first time to DS Najib as his officer was after a meeting held at his residence in Taman Duta, maybe a week after my first day.
About six weeks later, the first time I entered DS Najib's office alone, while talking, my legs were shaking! Before entering, I practice the verses of my conversation over and over in my head!
But I am me..Always talk out, we remember in the head, cerottttt, out in the mouth. Hahaha!
DS Najib is a very patient person, never raised his voice, or sneered. Most notably when he is angry or dissatisfied, his earlobes turn red and / or his hair is tangled.
He also has a first class memory bank, he can remember the names of all KSU-KSU, the results of any meeting that took place 2-3 years ago, statistical figures including oil prices that change every day. Often, we are blindfolded officials because from his head, DS Najib mentioned the numbers (5.9374 for example) that were given to him 4-5 days before.
This I am very impressed with.
In the meeting, he gave the opportunity for all those present to speak and be willing to compromise if the proposal in the middle is logical and fair.
Every time the Economic Division (it is my Division) meets with DS Najib (together with the Ministry of Finance) to make the annual Budget speech - almost every night two weeks before the day of the presentation - every night he will ask or include allocations for various parties. can? ”,“ B40 what else can we help? ”,“ What kind of fisherman? ”.. he asked the firefighter.
If we, the officers, are not sure, he will pick up his mobile phone and call the minister. I remember him calling the Inspector General of Police to ask about the status of the police barracks.
Every year, after this Budget meeting, we will chat while walking to our respective cars and between us praise DS Najib, how concerned he is with the needy.
She is also very concerned about women's affairs and in fact, she works well with Tan Sri Sharizad, the Minister of Women and Family.
DS Najib's English proficiency, first class, and often, when speaking English, his "English accent" plate will come out in a slight effect.
As special officers, it is our practice not to repeat anything that is told or directed by the Prime Minister to anyone unless necessary for business purposes. In fact, every officer has signed a secret affidavit.
Sometimes, DS Najib will also complain about his Cabinet ministers, or civil service officers but this is all, we should never repeat, especially if the person he complains to is a Cabinet Minister.
Another practice of mine is that if the Prime Minister complains or complains to us about a minister, a civil service officer or any of his office officials, I do not agree, do not pour oil anymore, or become a firestone.
Either I just said, "Yes, sir, yes, sir" or I gave a positive word like, "I'm sure it was a genuine mistake, sir." Sometimes, we do not know, DS Najib wants to test our personality.
One more thing, DS Najib is a kind person (maybe too good). If we make a mistake, we say, “I am sorry, sir. I will make sure such mistake will never happen again. ” And it is obligatory for us to make sure that the mistake will not happen again.
Because DS Najib is kind, I was informed that it is very rare for DS Najib to stop the services of his officers. What will happen, the name of the officer will not be mentioned again or given any task and will not join any list following the official delegation.
Lots more stories. I will connect later, if God allowing.
at February 08, 2021
Email ThisBlogThis!Share to TwitterShare to FacebookShare to Pinterest