Indonesia to establish electric battery corporation in H1 this year 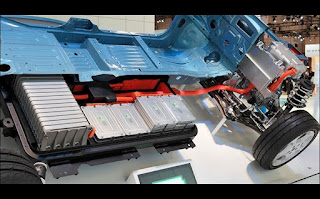 Indonesia is gearing up for establishing an electric battery company to meet the country's prospective development of electric vehicles including motorcycles, cars and buses.The Indonesian State Owned Enterprises Ministry has been preparing a holding company that would build a battery industry for electric vehicles, which was expected to be completed in the first half of 2021.The corporation will involve four state enterprises, including the company specializing in aluminium smelting PT Indonesia Asahan Aluminium or MIND ID, mining firm PT Aneka Tambang, oil and gas giant PT Pertamina, and electricity company PT Perusahaan Listrik Negara (PLN)."We hope the Indonesia battery corporation as a holding company can be formed in the first semester of this year," Deputy Minister of State-Owned Enterprises Pahala Mansury told a virtual press conference on Tuesday.He explained that MIND ID and PT Aneka Tambang will play a role in the upstream process from mining to smelting and processing of raw mineral materials.The official added that PT Pertamina and PT PLN will be on the downstream side in the process of producing precursors, cathodes, battery cells and battery packs to their storage.According to him, the Indonesia battery corporation would have joint venture companies or potential partners that could be from China, South Korea, the United States or Europe.He hoped that those potential partners would serve as main global players to provide capital, technology and markets for Indonesia's electric battery industry.Mansury pointed out that the development of the electric vehicle battery industry is estimated to add to the national economy of 25 billion U.S. dollars in 2027.Pertmina alone has begun preparing the production of electric batteries (battery packs) for electric motorbikes in an effort to accelerate the development of electric vehicle ecosystem in Indonesia.Heru Setiawan, president Director of PT Pertamina Power Indonesia, told a virtual press conference in Jakarta on Tuesday said it would be easier to convert to electric vehicles starting from two-wheeled vehicles, which is very large in number in the country.Setiawan said considering that the new battery cell factory would only be completed in 2025, Pertamina will import battery cells for battery pack production."Even though the battery cell factory has not yet been completed, we are trying to make battery packs, but battery cells are imported in limited quantities as an introduction product, and we make batteries for motorbikes," he was quoted by Antara news agency as saying.Once the battery cell factory is completed, the battery cells can be supplied from domestic production, he said, adding that Pertamina would also invite other parties to support the production of electric batteries for motorbikes.In developing the electric battery industry, Pertamina will be involved in the intermediate stage, namely in the production of precursors, cathodes, battery cells and battery packs, he said, citing that the company has prepared an investment for the construction of the factory.Setiawan further said the capacity of the battery cell factory is targeted to reach 140 GWh (Gigawatt hours) based on the nickel potential in the upstream area of 15 million tons per year.Production of battery cells is expected to enter the global supply chain and be supplied to electric car manufacturers in Europe, the United States and Asia-Pacific, he noted."Of course we will also participate with technology providers that already master the technology as well as the market so that there is technology transfer in this cooperation," he said.Meanwhile, the Ministry of Industry said Indonesia is ready to produce electric buses with a capacity of 1,200 units per year.Currently there are three industries that are ready to produce with a capacity of 1,200 per year, namely PT Mobil Anak Bangsa, PT INKA, and PT Indonesian Electric Vehicles, Taufiek Bawazier, the ministry's Director General of Metal Industry, Machinery, Transportation Equipment and Electronics, said on Tuesday.According to him, Indonesia's readiness to produce electric buses is in line with technological developments and strengthening environmental aspects as well as reducing carbon.He said the technology used for electric buses has also been on a roadmap prepared by the Ministry of Industry.In addition, the government is also preparing a charger station network for electric vehicles, and electric vehicle battery factories as well as strengthening infrastructure for electric-based vehicles.Bawazier hoped the national bus industry could contribute to the national economy given the considerable potential.Indonesia, with a population more than 270 million people, 34 provinces, 451 districts and cities, needs large vehicles, such as buses for daily life in addition to such sectors as tourism, government and commerce, he said.
at February 06, 2021
Email ThisBlogThis!Share to TwitterShare to FacebookShare to Pinterest
Labels: Battery, Corporation, Electric, Establish, Indonesia, ThisYear