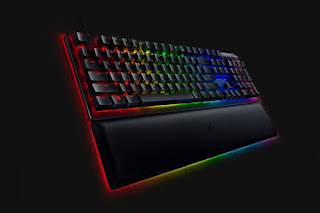 Razer has announced its Huntsman V2 Analog keyboard, which features, as the name suggests analogue input. It’s certainly not something you frequently seen on keyboards, which makes it an interesting addition to any PC gamer’s repertoire.

The idea here is to give the keyboard the sort of “velocity control” that you’d expect from a controller analogue stick. Push slightly to walk, push all the way to run, that sort of thing. In a sense, the Huntsman V2 Analog is the opposite of the Nvidia controller patent we saw last month.

In addition, Razer is also giving the Huntsman V2 Analog adjustable actuation and dual-step actuation. Working in tandem with the analog input, you get two actuation points for each key. Meaning you get one input when you press a key lightly, and another when you press it all the way. You can also adjust the point of actuation for both.

Ironically, the Huntsman V2 Analog may be a better controller than actual controllers. These features are reminiscent of the pressure sensitive buttons of the DualShock 2 and 3. These days, only the triggers and analogue sticks themselves retain the analogue input.

Though of course, making an entire keyboard capable of analogue input doesn’t come cheap. The Razer Huntsman V2 Analog is priced at RM1199 on the brand’s official online store.