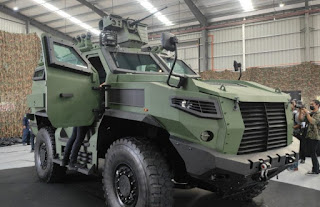 MILDEF International Technologies earlier today has unveiled its new 4X4 High Mobility Armoured Vehicle (HMAV). Said to be fully manufactured locally, the Sepang-based company has been developing it for the past four years with an R&D cost of around RM 16 million.
Around 70% of its components including chassis, body, and engine system are made in Malaysia while the rest which covers axles, engine, and transmission were imported. Through the assistance from Science & Technology Research Institute for Defence (STRIDE) and Malaysian Armed Forces that helped validate its design, MILDEF’s HMAV has been built to meet the protection level as stipulated under NATO STANAG 4569 Level 2 and Level 2B standards. 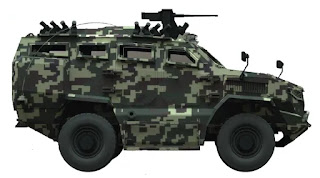 Powered by a 330hp 7.2-litre turbocharged diesel engine that is supplied by Caterpillar, the 14-tonne armoured vehicle has a maximum speed of 110 km/h. MILDEF has also equipped HMAV with a remote controlled weapon station (RCWS) that can be operated directly from inside the vehicle.

Even though only two prototypes of HMAV have been completed so far, MILDEF claimed that it has received more than 100 orders from customers outside of Malaysia. Naturally, the company has also planned to preview HMAV to the Ministry of Defence shorty and will also promote it throughout Southeast Asia within the first quarter of 2022.