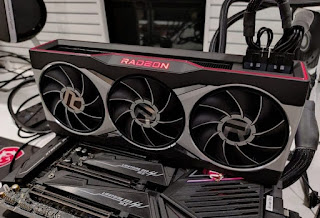 A new leak surrounding AMD’s alleged mid-range Radeon RX 6700XT recently made its way on to the internet, almost a week after information about the GPU first surfaced. The latest information comes by way of hardwareLUXX’s Andrew Schilling, who also seemingly managed to come across the card’s “official” logo.
In addition to the logo, Schilling also says that the 6700XT will reportedly ship out with 12GB GDDR6 and will be targeted at gamers looking for an all-out graphics experience at 1440p resolution, max. Unfortunately, Schilling’s tweet fails to mention a possible price tag, but does assume a potential launch date, either in the first quarter or first half of 2021.
Schiling’s forecast of the 6700XT seems nearly identical to our earlier report; then, as now, the rumour suggested that the card would have the same amount of memory, but also that it could presumably be running at 16Gbps and a 192-bit memory bus. Further, the card may have 40 Compute Units (CUs), a 96MB Infinity Cache – the 6900XT, 6800XT, and 6800 all ship out with a 128MB Infinity Cache – and a game clock of between 2.3GHz and 2.5GHz.

Given its internal specifications and its supposed target market, the 6700XT could end up trading blows, either with NVIDIA’s GeForce RTX 3060 Ti or RTX 3070. Sadly, without a market price, official or estimated, we can’t say for certain which one would be the competitor.

Seeing how this is merely a rumour, the standard rules of sodium consumption apply.