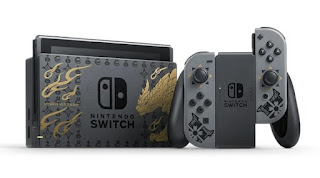 Monster Hunter Rise is the next big thing for the Nintendo Switch. With that, you’d expect a special edition of the handheld console hybrid coming up soon. And sure enough, one such thing is indeed happening.
The Nintendo of Europe Twitter account posted the announcement. It will come in a bundle, which will not only have the gorgeous-looking Nintendo Switch, but also a code for the Deluxe edition of Monster Hunter Rise itself. There’s also a similarly themed Pro controller, which can be bought separately. 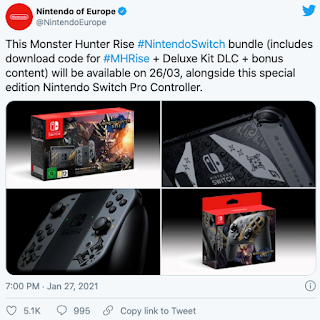 And it’s very pretty indeed. The back of the Nintendo Switch itself features Kamura Village-themed prints. The same goes to the Joy-Cons, but there’s a lot of additional details around the analogue sticks, which make it look even better. Most special is probably the dock, which features Magnamalo, the game’s flagship monster. The Pro controller also features Magnamalo.