NSFW Mousepad Gets A Surprising Number Of Pre-Orders 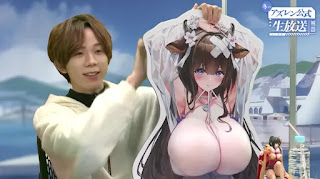 It’s priced at a whopping 49,500 yen ($468).This mouse pad is apparently heavy and was designed by the president of Yostar, the company behind the game.The final product version was shown on a recent Azur Lane livestream—with the oppai part of the mouse pad said to now be softer than the previous sample.Since this is a full-scale recreation of the character, it’s much larger than your typical mouse pad and probably wouldn’t actually be used as such.
at February 24, 2021
Email ThisBlogThis!Share to TwitterShare to FacebookShare to Pinterest
Labels: Mousepad, NSFW, Number, OfPre-Orders, Surprising