Postal Workers’ Union to Hold Protest Over Pay in Taiwan 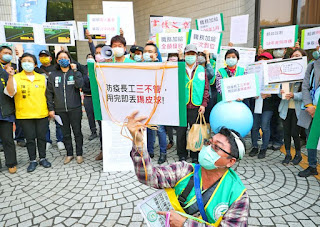 The Taiwan Postal Workers’ Union is today to protest at Chunghwa Post’s headquarters in Taipei, where they plan to submit a petition asking the company to enforce its “equal work, equal pay” policy.The union insisted on holding the protest as planned, despite Chunghwa’s board of directors on Friday agreeing to give the workers a raise, based on a management proposal.The Ministry of Transportation and Communications had also expressed support for the proposed raise.Based on the proposal, mail carriers’ salaries would increase by NT$2,494, while clerks at the service counters would see their salaries rise by NT$4,850.“The plan still needs final approval from the Executive Yuan, which might or might not agree to it,” union spokesperson Chen Kuang-chih (陳廣志) said. “In addition to the Chunghwa Post’s headquarters, we are also submitting our petition to the Ministry of Transportation and Communications, the Executive Yuan and the Legislative Yuan. We hope that all parties can understand the plight of postal company employees, and the Executive Yuan can quickly pass this proposal.”Since the government changed the postal service from a government agency to a state-run company in 2003, employees in the company have been paid under two different systems, Chen said.Even though former government workers and employees recruited after the state-run company was established perform the same type of work at Chunghwa, the former was paid more in salaries and performance-based bonuses, while enjoying better benefits, Chen added.“Why do two employees do the same type of work, and one has benefits and the other does not? This is systematic discrimination, which pits employees against one another. The unfair practice should not persist,” Chen said.
at February 08, 2021
Email ThisBlogThis!Share to TwitterShare to FacebookShare to Pinterest